A Meal Out With Joe: The Depot Cafe & Smokehouse

Gil Ruiz’ eyes lit up when he was talking about the building he occupies for his barbecue restaurant. He opened The Depot Cafe and Smokehouse in October
2004. Located one block west of Everett Station, the building itself has a very lengthy history. It was built by the Great Northern Railway in 1898
and was eventually operated by the Milwaukee Road Railway until they closed it in the 1970s.

A native of the San Francisco Bay area, Ruiz has been a part of the Seattle-area restaurant scene for many years, including a stint as general manager
of Lombardi’s on the Everett waterfront. Ruiz is a big fan of wholesome food. “I always strive for a farm-to-table approach when considering ingredients
and preparation,” he told me. “I’ve also been fascinated by natural cooking, particularly cooking with wood, so barbecue appealed to me. “He’s been
very successful with it too; garnering many awards over the years in barbecue competitions throughout the Pacific Northwest, where he’s known as “Uncle
Gilbert” on the competitive circuit.

Ruiz shops daily and locally for his ingredients and goes with organic and free-range whenever possible. “The wood I use for the barbecue pit is typically
a hard wood such as apple or cherry that’s acquired from Eastern Washington.”

As far as the type of barbecue is concerned, Ruiz describes it as regional, using different styles from around the country. “Our brisket is done Texas
style. Our Pork is a Carolina style and our Pork sandwich comes with the slaw and sauce right on it. Ribs are served Memphis style wet or dry. Our
‘Red Wolf BBQ Sauce’ is made from scratch in a Kansas City style, sweet, smoky, tangy and a little spicy.” The sauce is also for sale to take home,
by the bottle.

I asked him about the length of time it takes for him to smoke his products. His answer:”It depends. For shoulder and brisket it can be between 8 and 14
hours. For chicken it would be considerably less.”

On his website, Ruiz makes a point of saying that his pork sandwiches are “pulled” pork and not “shredded” adding to the handmade, small-batch concept
that he strives for. He sold me on the pulled pork sandwich so I ordered one to take home along with a side of Country Style Beans (made with black
beans, pulled pork pan juices, brown sugar and molasses). It was a great choice, as the chunks of pork were tender and smoked perfectly. And with the
tangy sauce and slaw, I enjoyed every bite.

I asked Ruiz what his favorite menu item is. He made a point of mentioning how much he likes the ribs but then added that it just depends on what he’s
in the mood for at a particular time. I can understand that answer.

In addition to everything mentioned above, The Depot Cafe menu also includes Louisiana Hot Links, angus chuck burgers, salmon burgers and an array of side
dishes and deserts. Beer and wine are served in the restaurant. They also provide catering for events.

More information and a complete menu can be found on the Depot Cafe and Smokehousewebsite at http://s653236842.initial-website.com/ 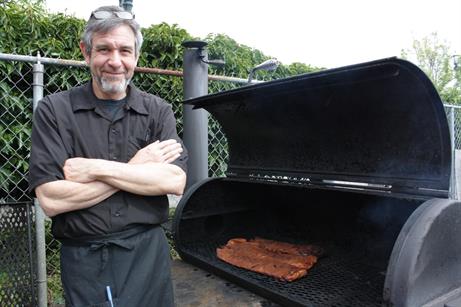 A Meal Out With Joe: Pho On Broadway

A Meal Out With Joe: Normanna Lodge #3

A Meal Out With Joe: A Pizza House