SEATTLE, May 17, 2017 /PRNewswire/ — Air travel will get a lot easier for flyers living in Snohomish County and
North King County, Washington, next year when Alaska Airlines introduces commercial service from Paine Field – Snohomish County Airport. Subject to
government approvals, starting by fall of 2018, more than a million North Sound travelers will enjoy shorter commutes to the airport and up to nine
daily departures. 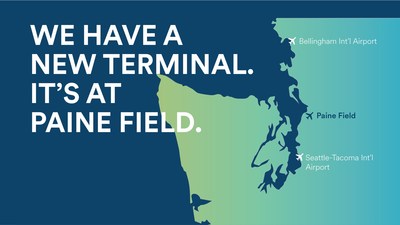 “As our region continues to grow at a record pace and Sea-Tac Airport nears capacity, the time is right to bring air service to our valued guests living
in the North Sound,” said CEO of Alaska Airlines Brad Tilden. “Today’s news means less time stuck in traffic on Interstate 5 and more time enjoying
your vacation or making the most of your business trip.”

Imagine spending more time getting to the airport than actually flying to a destination such as Portland, Oregon. That’s what many travelers, who live
north of Seattle, and drive to Seattle-Tacoma International Airport, frequently experience. According to publicly available traffic data, by flying
out of Paine Field, Everett residents, for example, could shave up to 80 minutes off their airport commute, during peak traffic congestion.

“This new service is great news for Snohomish County,” said Snohomish County Executive Dave Somers. “Businesses will have easier access to major markets
and leisure travelers can skip the commute down south, saving time and fuel. For decades, Alaska Airlines has been a responsible neighbor in our
region, and we welcome them even closer to home at Paine Field.”

Alaska Airlines plans to operate nine daily departures from Paine Field using a fuel-efficient fleet of Boeing 737 and Embraer 175 aircraft. This new
service will deliver all the comfort guests expect on an Alaska Airlines flight, while taking hundreds of cars off of I-5 every day.

“Alaska understands the local market, so having our Seattle-based airline be the first to provide scheduled passenger service from Everett just confirms
the value commercial flights will bring to the local economy,” Everett Mayor Ray Stephanson said. “Alaska is an industry leader in service and
reliability, and our citizens and businesses will benefit from having such a convenient travel option right here in Everett.”

Led by Propeller Airports and Snohomish County, construction of the state of the art terminal is slated to begin in June. Alaska plans to announce
routes, flight schedules and begin selling tickets early next year.

“Propeller couldn’t be prouder than to partner with the hometown airline on this new service. As Alaska does everyday, our goal is to put the customer
first, making the travel experience truly exceptional,” said Brett Smith, CEO of Propeller Airports.

Alaska Airlines Blog: New flying out of Paine Field will ease commuting pain for many

Alaska Airlines, together with Virgin America and its regional partners, flies 40 million customers a year to 118 destinations with an average of 1,200
daily flights across the United States and to Mexico, Canada, Costa Rica and Cuba. With Alaska and Alaska Global Partners, customers can earn and
redeem miles on flights to more than 900 destinations worldwide. Alaska Airlines ranked “Highest in Customer Satisfaction Among Traditional Carriers
in North America” in the J.D. Power North America Airline Satisfaction Study for 10 consecutive years from 2008 to 2017. Additionally, Alaska Mileage
Plan ranked “Highest in Customer Satisfaction with Airline Loyalty Rewards Programs” in the J.D. Power 2016 Airline Loyalty/Rewards Program Satisfaction
Report for the last three consecutive years. Learn more about Alaska’s award-winning service and unmatched reliability at newsroom.alaskaair.com
and blog.alaskaair.com. Alaska Airlines, Virgin America and Horizon Air are subsidiaries of Alaska Air Group (NYSE: ALK).

Propeller Airports is a subsidiary of Propeller Investments. With offices in New York, Seattle and Atlanta, Propeller identifies untapped potential
for commercial air travel by working with local governments and communities to maximize airport assets. Propeller Airports is focused on opportunities
to invest, develop and manage both general aviation and commercial service airports throughout the U.S.

Fall has arrived and we turn our attention to ...
Tuesday, September 22

Rare NASA, Space, and Aviation Collectibles Up For Auction

Would you like to own a piece of American ...
Monday, September 21

JOBS, JOBS, AND JOBS! The U.S. Department of Transportation has ...
Previous Next