Amazon announced yesterday that they plan to pay full college tuition for front-line employees as part of a $1.2 billion investment in education and skills training for the U.S. workforce.

According to a release, more than 750,000 operations employees in the U.S. are eligible for fully-funded college tuition, including costs of classes, books, and fees. Specifically, the company added three new skills training programs for employees to help them transition into jobs as data center technology technicians, IT engineers, and user experience designers. Meaning, Amazon now offers nine education and skills training programs that the company fully funds. The $1.2 billion investment is on track to be fulfilled by 2025.

The announcement explained that this effort is possible through their Career Choice program. Amazon will be able to fund full college tuition, high school diplomas, GEDs, and English as a Second Language (ESL) proficiency certifications for its front-line employees – including those who have been at the company for as little as three months.

“Amazon is now the largest job creator in the U.S., and we know that investing in free skills training for our teams can have a huge impact for hundreds of thousands of families across the country,” said Dave Clark, CEO of Worldwide Consumer at Amazon. Clark explained that Amazon launched Career Choice almost ten years ago to help remove the most significant barriers to continuing education; time and money.

According to their website, the 1.7 trillion dollar e-commerce company will be paying the employees’ tuition and fees in advance rather than offering reimbursement after coursework completion. By doing this, Amazon employees wouldn’t need existing funds to start accessing the education options available.

The release also included that all 750,000 U.S. hourly employees can participate in Career Choice 90 days after starting at Amazon. Meaning, all 400,000 employees who joined the company since the pandemic are eligible for education opportunities.

According to the first-ever Amazon-Gallup American Upskilling Study conducted by Gallup and commissioned by Amazon, 35% of workers in the Seattle area say they would leave their job if offered free skills training elsewhere.

Access to skills training is becoming a sought-after employee benefit and a powerful talent-attraction tool in Seattle and across the country amid nationwide disruptions due to COVID-19. 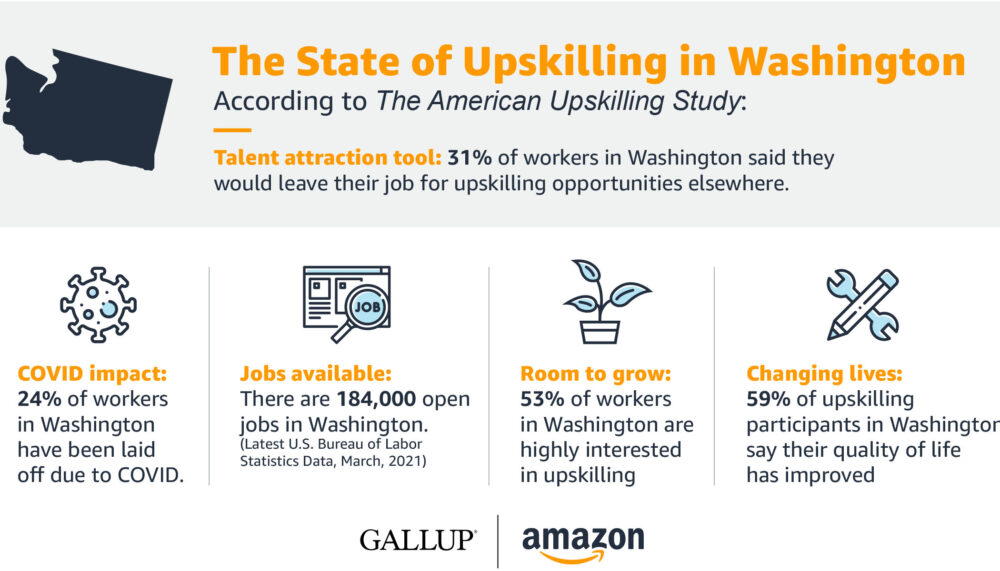 The State of Upskilling in Seattle-Area*

24% of workers in the Seattle area have been laid off due to COVID.

52% of Seattle area workers are highly interested in upskilling.

55% of Seattle area workers have participated in skills training programs in the last 12 months.

69% of Seattle area workers are interested in skills training opportunities where they are paid while learning. However, only 27% have participated in this type of training.

When thinking about the impact that training/education has had on their lives, 64% say it has improved their quality of life.

*According to The American Upskilling Study.