About 42 years ago, a couple named Joe and Manny Hadlock had an idea to build an “escape-studio” that, believe it or not, is not even a half hour out of
Everett. This recording studio is hidden away on Maltby Road among the trees and is disguised as a barn. 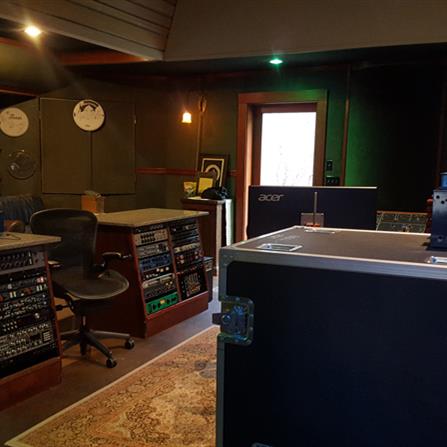 This studio is filled with history; its wood was salvaged (as much as possible) from the pre-existing 100-year-old barn and it’s door has been opened
to numerous faces, largely known and locally known. This unique studio has hosted everyone from Foo Fighters to Fleet Foxes, G. Love & Special
Sauce to The Lumineers, and Tragically Hip to Train. Not only does this studio do business with bands big and small but they also do advertising
and other things with clients as Rainier Beer was actually their first. This hidden home to legends is known as Bear Creek Studio.

Taylor Carroll, an engineer at Bear Creek Studio, explained that, “the studio is still kind of evolving as the years go on, it’s been open for over
40 years now and the same family that owns it currently were the ones that built it back in the 70’s.” Joe and Manny Hadlock’s son, Ryan, is more
in charge of the operation now, but Joe and Manny still live in the 1920’s house just next door to the studio, “they’ve lived in [it] since the
70’s.” 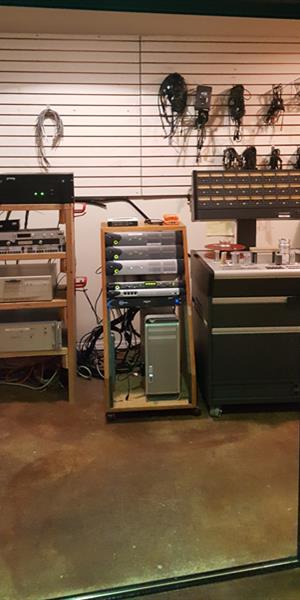 The small, barn studio quickly outgrew its space and began to really change form in 1993 when what Taylor calls, “the Big Room” was built. This main
space with its big vaulted ceilings is not the end of the expansion, the studio is constantly improving and adding on. They have since added a
control room, a producer’s cabin, and even a treehouse equipped with some beds and minor recording devices!

Taylor explained how he can never go far from this place, he is a drummer himself and first came to Bear Creek as an intern in 2010. He said, “I’ve
worked in a number of studios and it’s just such a different feeling than everywhere else because, like I said, there’s no feeling of anything
being sterile, you don’t feel like you’re closed off in a box at all, there’s windows everywhere, the rooms are big and open, and there’s all kinds
of fun things.” 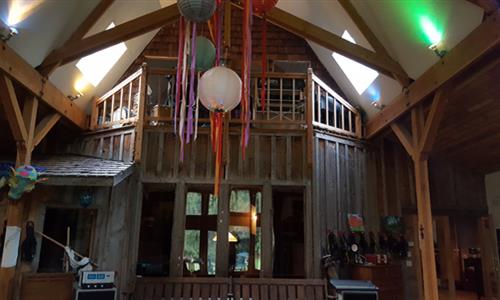 Kevin Murphy, the singer/guitarist for a local-band-gone-big called The Moondoggies, shared a similar feeling about Bear Creek as Taylor. The Moondoggies
have been together for 12 years and recorded their third record at Bear Creek in 2012. They spent a whole month recording there, basking in the
light that the big windows let in.

Kevin explained that was his favorite part about the studio, that was absent from the others: “I remember at one point we were doing this song and
the sun was like in my eyes coming in through, it was beaming onto the microphone and into my eyes and I just remember, I can still see it, because
it was a very surreal experience, kind of idyllic.”

Kevin also explained how this studio is very close to where he grew up, in fact the keyboardist for The Moondoggies, Caleb Quick, grew up just down
the street from the studio and his parents still live there. For Kevin, Caleb, Carl Dahlen (drums/vocals), and Robert Terreberry (bass/vocals),
it was kind of exciting to record in a studio where some of their favorite bands had previously recorded: “I had a really positive experience and
if you have the opportunity to, people should definitely experience it… It was cool to be part of what I would consider kind of a historic recording
site in Washington.”

Josiah Muldowney, the singer/bassist for a local metal band called Emanon, and his bandmates Noah Wheeler (lead guitar), Justin Greene (rhythm guitar),
and Evan Larson (drummer/vocals) shared this excitement of recording where legends have been; “Soundgarden recorded Badmotorfinger there.”
Emanon has experienced a number of other studios, even at their young ages of 19, 20, and 22: they have recorded at Studio Sage, South Sound Sound,
and at the Seattle Art Institute. 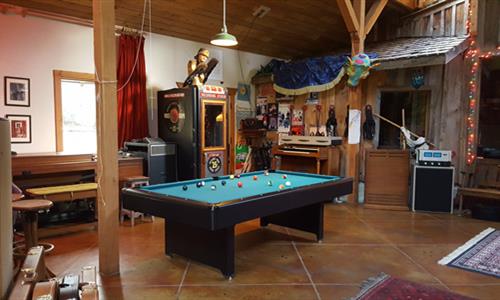 Josiah explained his experience at Bear Creek: “For us, it definitely matched our vibe more and it just felt really good to be there. They have a lot
more years… under their belt, they have master equipment, they have more experienced engineers, they have interns there to help out and everything
so overall there was just more help and there was better equipment, so better quality. So yes, I think its gonna turn out way better than the last
album.”

Josiah told me how Taylor handed each of them notebooks after they would finish a song and have each band member focus on only their part and write
on the notebook what needs to be improve. He said this really helped them all to focus and really produce the best that they could. 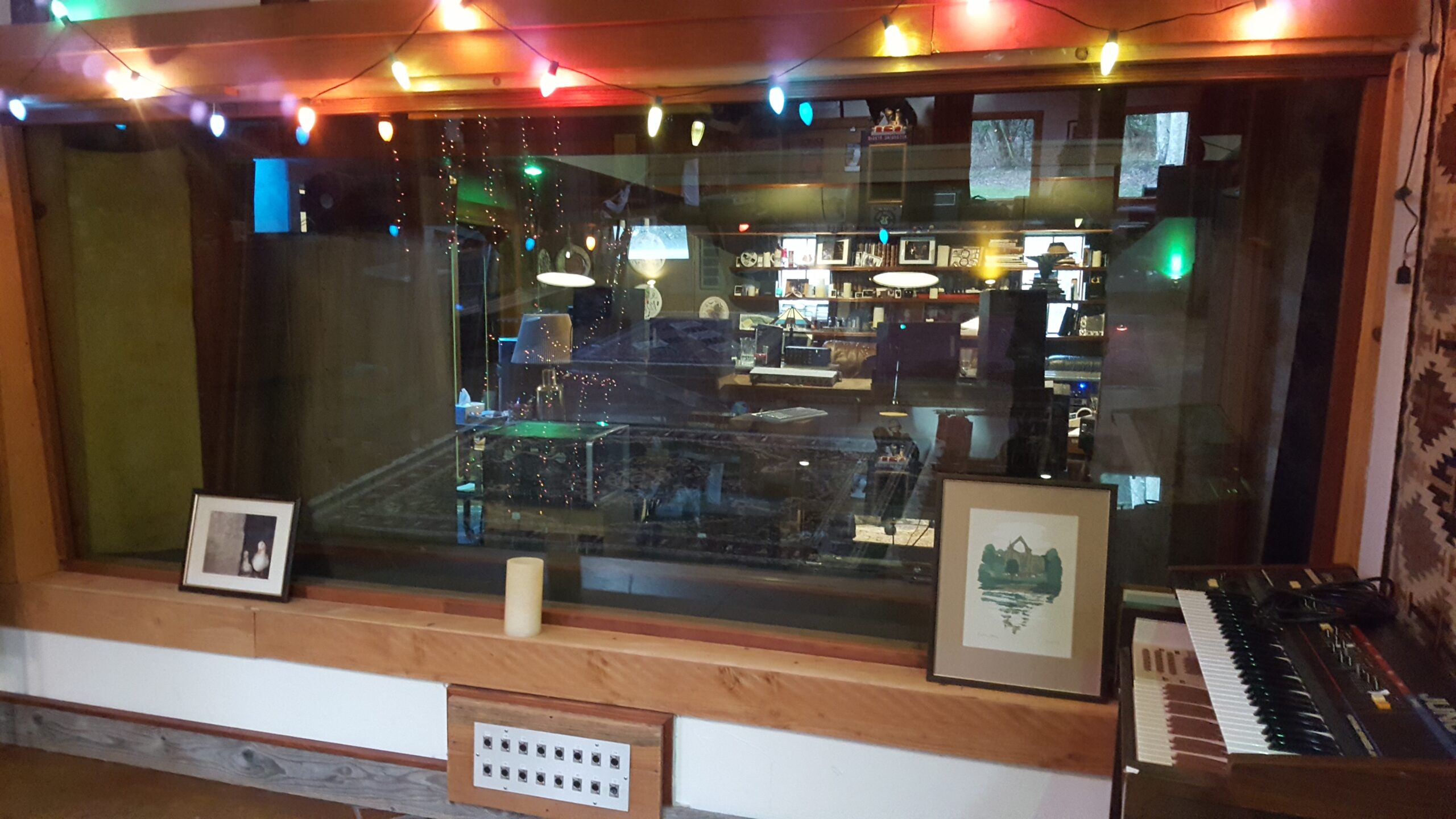 The quality of the care provided at Bear Creek, according to Josiah and Kevin, is certainly “different” than other studios. However, in this day and
age, Taylor explained to me that so many musicians just record themselves at home: “It’s also pretty rare for a family-run studio like this to
have been open for over 40 years consistently. But still, people are attracted to it, even in this age where people are making albums in their
bedrooms and things like that, there’s still such an appeal to be able to go out and just get cozy in the woods and let all the craziness of the
world not distract you for a while.”

If you are looking for a place to record, a place that will give you the opportunity to create something “unique” or “different”, Bear Creek Studios
is your answer. Taylor Carroll won’t be going far, as he says, “I can’t imagine really fully going anywhere else. No matter what happens in my
life I would love to always have the idea of going back to Bear Creek and making a record there at any point because it’s just unlike any other
place.”

Attribution for this article goes to:

Special thanks to Josiah, Kevin and Taylor for hosting and interviewing.

Your Home Ready For Winter?

Man from SnoCo Disarms, Takes Down Armed Felon While Vacationing in Utah