I could see it from the second I stepped into his office—Chief Michael Schick was excited to talk about Camano Island Fire and Rescue Department.

It’s a fire department—and a community—that he deeply loves, and as we talked by the big picture window beside his desk, he couldn’t help
but look out toward the water and the highway that cut right beside it, completely proud of the island where he serves as fire chief.

But as fire chief, with the good comes the bad—and right now Camano Island Fire and Rescue team is facing both. 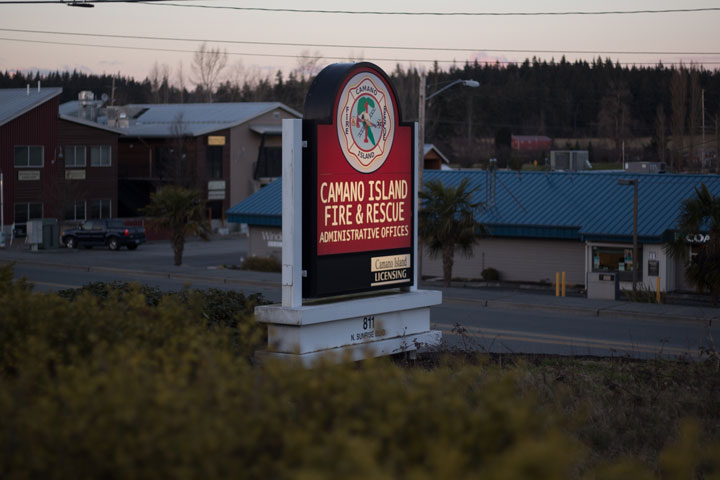 With the population of Camano Island getting older and a huge increase in emergency calls (almost 30% in five years), there is a tremendous need for
more funding. Because the fire department is solely funded by property tax levies and grants, they are turning to the community to let them know
help is needed.

As of now, $1.08 per $1000 of the assessed value of a property goes to Camano Island Fire and Rescue. That money funds personnel, maintains equipment,
stations, and emergency apparatus—and keeps ambulances on the road. But with an increase in demand for service also comes increased costs.

According to Schick, 80 to 90 percent of the fire district’s costs are fixed so that only leaves 10 percent wiggle room that can shrink every year.

The solution? Awareness that will hopefully lead to a “yes” vote on a levy in November asking to raise the tax from $1.08 to $1.35 per $1000, or about
$7.88 for the average homeowner. The last time voters approved a funding increase for the fire district was in 2004.

“By law, we can legally ask for $1.50, but we don’t need that much,” Schick said, waving toward the window. “These are great people…we understand
it’s their money and we need to be careful with it. I want the public to know that we’re very fiscally conservative but our calls are increasing
while our revenue is not. And that can be scary.”

The people on Camano Island love their fire department, Schick said, and it’s a community that deserves top notch service. The department has found
creative ways to serve the community, despite financial setbacks.

Something Schick and other fire fighters have noticed was the need for programs that find long-term solutions rather than band-aid solutions. One story
he used as an example was an elderly woman who used to call the station every night when she couldn’t get up from using the restroom to go back
to bed. One of the firefighters on duty made it his project to raise the level of the toilet to make it easier to get up and down. That not only
cut back on the cost of going out to her place every night to help, but it served her life in a positive way as well.

The goal, according to Schick, is to constantly look for ways to help others help themselves and each other.

The Camano Island Emergency Medical Information program is one initiative that has been warmly received and very successful. All it involves is a cardboard
tube, a Ziploc baggie, and a piece of paper with important medical information that stays inside the refrigerator. In an instance where someone
is unable to provide information themselves, that cardboard tube will be available so that medical response teams will know exactly what to do,
from allergies to prescriptions to the number of pets that are in the house and where their food is kept. It’s a simple idea—but a great
one.

CPR training, a class held one Thursday each month, is another initiative.

“Our response time right now is between 6 to 10 minutes. We’re low on staffing and have 5 to 7 full-time firefighters on the island per day (not including
volunteers). My goal is to have as many people on the island as possible learn bystander CPR so we can save more lives.”

Saving lives is the name of the game for the Camano Island Fire and Rescue, and Chief Schick knows backwards and forwards what that’s going to take.

“We have a good plan and good things in place,” said Schick. “But we need the increase to stay where we should be. It’s my job to get the message out
there—We need at least two more firefighters, new apparatus, and equipment replacement. We have to get smaller and quicker.”

The vote is in November and Schick is keeping his fingers crossed that the funding that is needed will come through so that they can continue to serve
their community in the best way they know how.

Just like Schick says in the Strategic Plan of Camano Island Fire and Rescue: “Our desire is to be an example for other departments in the area, state,
and even nationally. I can think of no higher compliment…than for our peers to say, ‘Let’s do it like Camano Island Fire & Rescue does
it.’”

Although the vote to raise the levy is restricted to Island County citizens, you can help the Camano Island Fire and Rescue by donating your time as
a volunteer.