[Arlington, Wash.] Throughout the year members of the Rotary Club of Arlington help with service projects at Camp Fire Mountain east
of Big Lake in Skagit County. The camp is owned by the Mount Baker Council, Boy Scouts of America. Past projects have included funding and building
camp shelters, replacing a deck on the dining hall, building amenities for the camp’s swim beach, and multiple smaller projects.

On Saturday, October 14, 2017 members of the Rotary Club of Arlington worked to frame two new staff cabins. The cabins will be a part of a staff village
that will include multiple 4-person cabins, bathroom and shower facilities, and work area. Eventually, six of the cabins will be tree houses in
the forested area along Lake Challenge.

The first 4 cabins were framed by the Rotary Club of Marysville. The cabins are awaiting interior work and the completion of a bathroom-shower house
before being occupied. Plans are to have cabins occupied by the next summer. 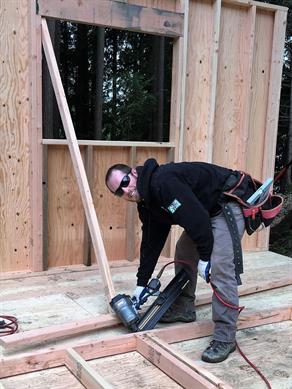 The Fire Mountain Scout Reservation is 620 acres with a 37-acre manmade lake. Since 2011 major additions and improvements have been made at the camp,
including a new boat marina, improved swim beach, zip line, high and low copes courses, expanded dining hall, and an improved shooting sports area.
There are 18 campsites with shelters at the camp for year-round camping.

Duane Rhodes, Scout Executive for the Mount Baker Council of the Boys Scouts of America, added, “In addition to all the work at Fire Mountain, the
club has supported Scouting with leadership and equipment for Cub Scout Pack 178 in Lakewood and Boy Scout Troop 29 in Arlington. Current club
president, Jola Barnett, started and led for several years an Explorer Post at Cascade Valley Hospital for high-school age boys and girls interested
in health careers. Former club member and Arlington School District Superintendent Dick Post was the Mount Baker Council board member responsible
for all of north Snohomish County. Club member Dave Duskin has served on the board of the Mount Baker Council for over 40 years, chairing that
board for several years and chairing the council’s last capital campaign. Club members support the council’s annual Good Scout Breakfast each spring
and the auction each fall. Bryce Duskin appears headed in his father’s footsteps, currently leading his own son’s Cub Scout den. Overall, this
club has had a huge impact on Scouting in this area over many years.”

The Rotary Club of Arlington is a group of local business owners, professionals and community leaders who are dedicated to making the world and our community stronger. Rotarians are committed to the ideal of “Service Above Self.” The Rotary Club of Arlington raises over $100,000 annually from the Great Stilly Duck Dash. The money raised gives back to our community through giving to organizations such as the Boys and Girls Club, the Stillaguamish Senior Center, Kids Kloset and Youth Dynamics, as well as, awarding scholarships to students in Arlington, Lakewood and Darrington. The Rotary Club of Arlington also belongs to Rotary International, the very first service club in the world, started over 100 years ago. It is one of the 34,000 Rotary Clubs in over 200 countries and territories with over 1.2 million members worldwide.