A young starry-eyed couple holding hands, a father with two spunky sons pushing a wheelbarrow filled with pumpkins. Today, a charter bus filled with energetic
millennial retail professionals getting some organic inspiration for their upcoming holiday sales season. And all around us, pumpkins of every shape,
weight, size and color!

Carleton Farms, off HWY 2 East and South of Everett, is one place where there is an activity for every single member of the family. The farm is home to
a smartly designed wine country style gift shop, pumpkin patch, paintball, maze, zip line, wedding barn, hay rides, peacocks, roosters, horses and
a very chatty Billy goat. 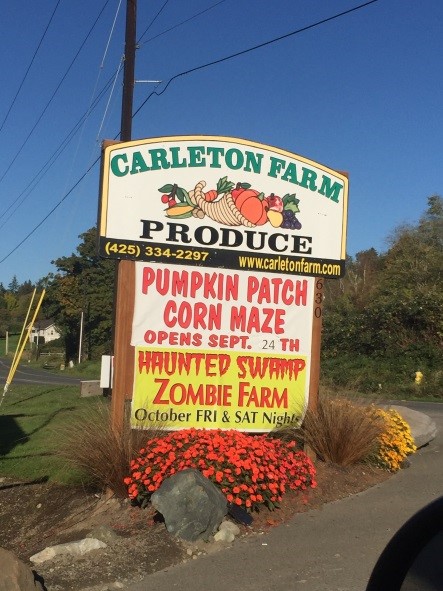 I haven’t told him yet but I will be bringing my fiancé Gavin to Carleton Farms to check out the pumpkin cannon, designed by Carleton’s younger brother,
where they shoot pumpkins between nine hundred feet and half a mile! Yes, you heard that correctly, the length of two football fields. I neglected
to ask Darren if pumpkin cannon etiquette requires one to yell “fore!”, if a 20 lb pumpkin is heading toward life and property.

And those are only the day time activities. At night the farm is open for Carleton Farm Frights, the Haunted Swamp, the Zombie Farm, Flashlight Maze and
the Premiere Zombie Paintball and Extended Experience.

As I was making my way around the eighty-acre property, a fancy charter bus rolled up to the gates of the farm and out spilled a couple dozen millennials
who came to Carleton Farms today to do what millennials are expert at. They were getting out of the office to recharge their batteries. 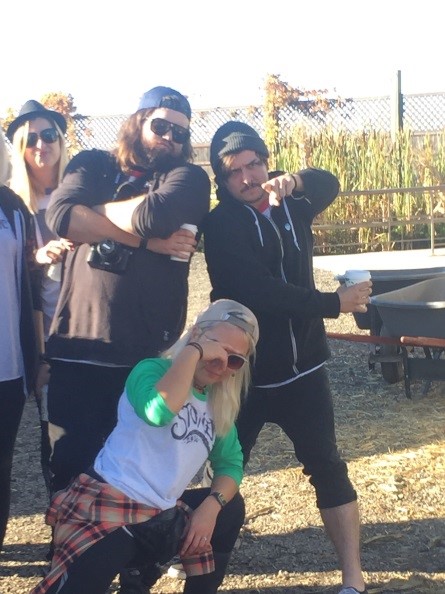 Stephanie Savage is the Creative Director for ZUMIEZ, a six hundred store national sport clothing franchise whose headquarters are right here in Lynnwood.
Savage said the trip to Carleton farms today serves two purposes for ZUMIEZ retail professionals; “It’s a ‘feel good day’ plus, getting everyone in
the right mindset for the next season”.

Soon after calling out the rules to a game of corn maze-ball, where they would communicate with game referees via text, the energetic twenty and thirty
somethings were off for some competitive attitude adjustment and exploration.

A Legacy of Soil and Generosity

Darren Carleton, son and current manager of Carleton Farms says the farm has been in existence for fifty years. It began as most farms in the area, as
a raw milk dairy farm. In the late seventies, the family transformed it into a pumpkin farm and re-developed it for family friendly activities. During
the fall season, their busiest, Carleton says the farm greets thousands of visitors who come from all over the region.

Carleton does not stop moving. At one moment he is in the store organizing things like the Carleton Farms chuck wagon and the next, greeting motivated
ZUMIEZ crew. Asked why he opens up his family farm to the public, his eyes light up in the mid-October sunshine, “I love the people!” He expanded on
his sentiments to include, “We have seen many families year after year, have watched their children grow up, the circle of Life”.

If you want to take your own fiancé to visit the farm, get the kids away from the x-box, or take Aunt Lucy on a lovely stroll, Carleton Farms is open from 10 – 6 on Monday-Sunday. They’re located at 630 Sunnyside Blvd, SE in Everett.

Light Up Lake Stevens: Fun For The Whole Family