Tyler McGuinn is leaving his long-standing post in the military in order to fully focus on his burgeoning business: DinoCrew NW. 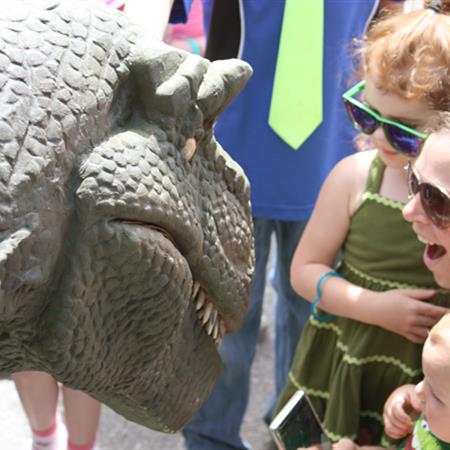 DinoCrew got its start as the brainchild of Greg McGew, who is located in Phoenix, AZ. Tyler crossed paths with him at an event in which the dinosaurs
were performing and was intrigued by the concept. From November of 2017 until just five weeks ago (in late May), Tyler has dedicated his time and capital
to developing the business.

At DinoCrews NW, skilled performers don lifelike mechanical dinosaur suits that weigh in at an impressive 50-60 lbs and interact with spectators. They
have a series of engaging games to play, tailored to the age and atmosphere of the spectators, to make sure nobody feels intimidated or shy around
the giant creatures.

The suits themselves effectively fit their wearers like backpacks- if backpacks weighed sixty pounds and included metal frames. Once suited, the performer
manipulates and steers the dino-contraption through handlebars where controls are affixed to move the eyes and mouth, and also create sound effects.
It’s a gig that is not for the faint of heart; the only means of seeing are through a camera located on the very tip of the nose; the feed is captured
and routed to a small screen directly in front of the performer’s face. For the sake of combating fatigue or heat exhaustion, there are also two small
fans wired to the interior to reduce what must be a strenuous task.

With the exception of a sense of smell, your ability to navigate and interact is based solely on the feedback of the camera. And if the camera goes out?
“It has happened. We deal with it.” 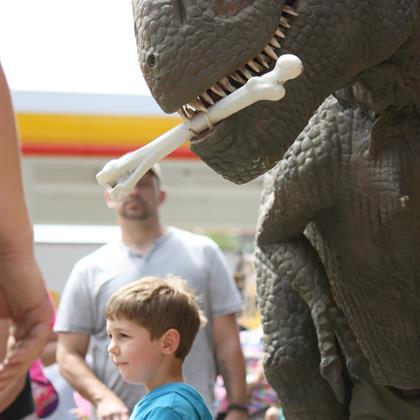 Since opening the doors, the enthusiastic response from local communities has been more than gratifying. Based in Snohomish, Tyler’s operating area is
far and wide: all the way from Boise to Portland, and all of Washington state. He operates with 4-5 (impressively durable) employees, and recently
acquired a photographer who goes along for their creative acts so that photos of the children and spectators can be printed instantaneously on-site.

The nuts and bolts of the operation itself present their own dilemmas. Tyler has created a business model that means his business can remain a viable model
throughout the course of the year, no matter what the weather throws their way. (Conversely, so has the founding branch in the hot temperatures of
the South West.) Spring and Summer are great for birthday parties and outdoor festivities, and the cooler months with higher precipitation pairs perfectly
with the school year, when DinoCrew NW head indoors and engages with children in school assemblies, in the form of anti-bullying campaigns. 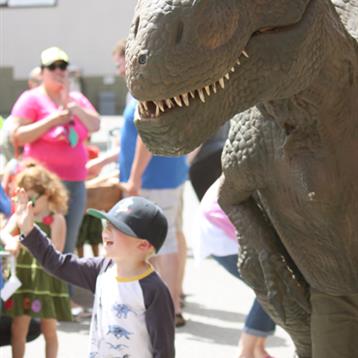 “Besides entertainment, DinoCrew NW will be reaching out to schools and STEM programs for learning opportunities and presentations. “When children
see what looks to be a real dinosaur in person, they’re hooked,” says Tyler. “They want to know more about these dinosaurs. There’s so much education
brought into this as well as the fun, of course.”

If you want to see them in person, head down to Kla Ha Ya Days for the parade. Just keep your eyes peeled for the 23 foot cage. The Kla Ha Ya Days
Parade begins at 10:30 a.m. Saturday July 21st on First Street in Snohomish.

“The dinosaurs are also available for birthday parties and more info can be found at http://dinocrewentertainment.com/ .”

Special thanks to Tyler McGuinn and Sarah Love of Matheson Media