She calls it “crabbin”. And it runs thick through her blood.

Katie is a Snohomish “sduhubš” Indian who lives on the Tulalip Indian Reservation, north of Marysville. She is a college student and teacher by day. But
it is her part-time seasonal night job that most city folk would find intriguing, although perfectly “ordinary” to her. Katie is a crabber.

Officially, the crabbing season is designated by the Washington State Fisheries Commission for a certain amount of days for tribal fisherman. Right now,
Katie is doing three nights of crabbin’ for Dungeness crab.

During a typical night of fishing, round wiry baskets called crab pots are immersed in the Puget Sound waters off Tulalip Bay two to three times a night
over the course of several weeks until a quota is met. Tulalip Bay, is home to over five hundred tribal fishing boats. Tribal fishermen and women fish
mostly for Salmon and crab. This is where Katie has spent her entire life.

On a good night, Katie and her crew can pull in eight to twelve hundred pounds of the sweet, tender Dungeness. She drops her crab pots and reels them back
in with a pulley and wedge system. And yes, there are rules. The crabs must be at least 6 and ¼ inches in length and only male crabs are harvested. 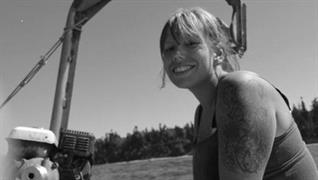 Crabbin
is not only a family tradition for Katie. She considers crab as spiritual beings who not only nurture her people physically but because they sustain
life, make them sacred to the Tulalip. And it is her spirituality that she asserts, saved her from certain death.

Not very long ago, Katie, a room stopping beauty, was as active and as deep into the local drug underworld as you could be. Strung out, using and living
the high life, left little time to pursue girlhood dreams or nurture the two centers of her world, Milo and his younger brother Cole.

Faced with the thought of losing her sons for good, she made the choice to get clean and sober. It was not an easy path, but suffice to say that Katie
is no shrinking violet. It is undoubtedly her strong will that allowed her to face down the demon that she is convinced would have eventually swallowed
her whole.

Other tribal traditions have been paramount to her recovery. Canoe Journey’s, is a 3 week spiritual water trek that makes Katie’s face glow when she speaks
of them. She says it was the canoe journey’s that got her clean and sober the first time.

Today, along with football practice for her sons, Katie teaches cultural sovereignty to tribal college students at the Tulalip campus of Northwest Indian
College. But crabbin’ is never far from her mind. When asked what the crab retails for when it makes it to city store shelves, she giggles, “Never
in my life have I bought crab from a store!”

If you are interested in purchasing smoked salmon call:

HALIBUT AND CHIPS OR CRAB LOUIE – YOU DECIDE

No Boats Sunk During Marina Fire on Oct 8