Entering Darrington there is a statue resembling a family of archers that greets newcomers.

Darrington, a backwoods community, does everything together. Even archery.

The city used to focus on timber and logging, but today it takes a more direct approach. They use family friendly events and sports to commune and strengthen
the community as the rural city is withering away.

Archery has been a big part of the lives of many in the community. Since the late 1970’s Darrington had been searching for a replacement of the timber
business.

This changed when Darrington native Marv Kastning, a field archer at the high school, decided to create a campaign for the city to build a field archery
range and promote the sport.

By 1982 Marv Kastning and a local Olympian Ed Eliason went against each other in Darrington and although Marv lost, it made the city think that the sport
of archery was the new frontier.

Another high schooler at the time was Darrington Archers President, Jack Barker, who looked on in amazement as the two shot their bows in the old community
center.

Barker said that the whole town gathered like it was a parade and it showed us that this a great idea.

The archery range was built shortly after that competition.

155 acres of hills, ravines, trails lead archers to targets hidden in the woods.

Barker said, “If you were in high school at the time then you would have made the hay and wooden bulls-eye stands for the field archery range as an elective
class. That’s what I did.”

After the 155 acres were trimmed and open to the community Kastnings put in the first bid for Darrington to host the 1st National Field Archery
Championship in 1982.

The archery range has a practice field and an area to dry camp for different events.

Barker said that since that day they held the championship, the city has hosted a PANAM Games and say that every 3 years they hold the Olympian Archery
Championship as well as the Field Archery Championship.

The Darrington Archery Range was therefore the new center of a new Darrington.

Barker said people were enthused to host archers so much so that they give up their own homes for the weekend. The town is literally giving their all into
new arrivals from all over.

Barker praised the community saying, “It would not be an archery community if it were not for the members of the Archery club and the citizens of Darrington.” 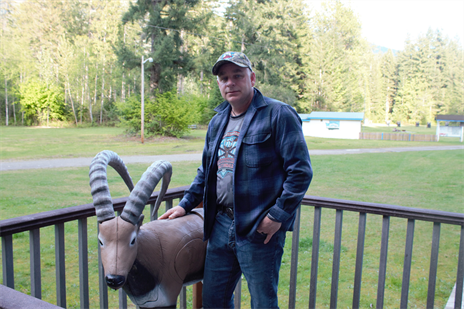 Darrington Archers group members take care of the range and all of the targets.

When the championships took flight the city signed the range over to the school district which then made a club that looks after the whole range called
the Darrington Archers- “The Family of Archers.”

Barker said that the sport is not just for one person–but for a family.

He describes his time on the range as a time to look at the beautiful bonding that a father and daughter or a mother and son have while they look for the
targets to shoot.

As the years have gone by the city of Darrington seems to wither away, but archery is about to change that.

Barker said, “I feel our community needs a new way to come together like when I was a kid. I believe archery is the answer.”

Light Up Lake Stevens: Fun For The Whole Family

City of Snohomish Delivers Family Fun: Movies in the Park