A stream of blue and green wrapped around Funko’s building in downtown Everett on Friday, April 20th, and curved around a city block as Seahawks fans eagerly
waited for their chance to meet Steve Largent, NFL hall-of-famer.

Although the doors opened at 2, the line started forming before the sun even rose–people in big coats, sleeping bags and thick hats bundled against the
building with their helmets and figurines and jerseys. 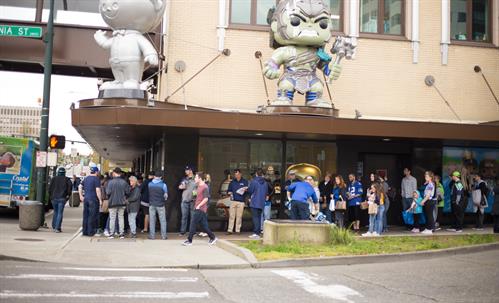 Steve Largent is a legend in this community as well as the entire NFL, as not only a name in the hall of fame but a lovable Seahawks wide receiver that
retired with multiple all-time receiving records.

This isn’t the first time that Funko has created a stir in the community.

Since opening their doors in August, Funko has quickly become the hub in the community of all things pop culture–from movies to TV shows to music and
sports, Funko has their finger on the pulse of what people want. And in turn? Lines upon lines upon lines of people down California Street, anxious
to get in.

Funko’s new Pop! figure of Steve Largent was an obvious hit, shedding light on how these fun modern-day “bobble heads” are a lot more than Marvel comics
or anime toys. These figures, handbags, purses, accessories, and vinyl figures are scattered among the 90,000 square foot building that’s home to amazing
design, exclusive items, and the feel that you’ve just stepped inside a modern-day Willy Wonka factory, complete with all things pop culture. 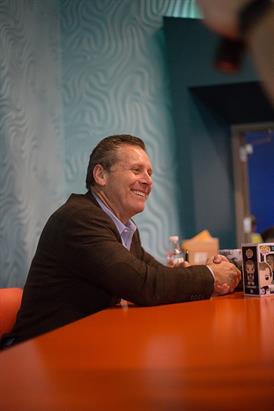 Steve Largent is just another notch on the belt of what people are dying to have.

And fans were more than happy to wait in line for his big smile, welcoming small-talk, and the pictures and autographs they were granted once they got
to the front.

To keep track of everything Funko has going on be sure to visit funko.com and follow them on facebook.

Funko HQ Is Finally Opening In The Jet City – Everett