The Hotel Indigo on the Everett Waterfront opened its door officially, ushering in guests in a grand opening ceremony on the evening of December 4th. The hotel represents the ongoing, large scale dreams for the Waterfront Place development as the area undergoes massive changes.

The Jetty can be found on the ground floor of the hotel and is open for all meals, along with a happy hour. The “menu features ingredients sourced by local purveyors, such as Lummi Island Wild and Taylor Shellfish, with a focus on approachable seafood dishes inspired by the Salish Sea like fish n’ chips and chowder.”

There’s a Jetty Grille Express that operates as a food service window, (weather permitting) which offers food to go for anybody in the area who may not be interested in sitting down for a meal indoors. Lastly, guests can access The Marketplace, advertised as a grab-and-go retail space with locally sourced goods, snacks, and fresh salads and sandwiches.

Lastly, there is over 5,000 square feet of outdoor venue space, for weddings, business or social gatherings or banquets. All in all, it is meant to be a versatile space, contributing its own part to the lofty Waterfront Project. 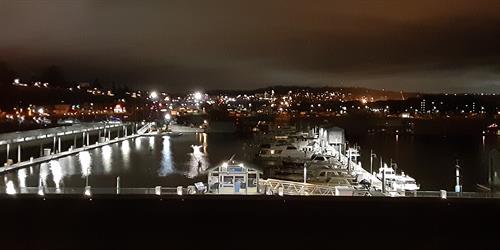 The Waterfront Project, formally known as the Port of Everett’s Waterfront Place Central Project, is creating a new neighborhood in Everett in the 65 acres of land left behind where our city’s smokestacks once stood. The neighborhood will include “public gathering spaces, up to 660 housing units, [the] hotel, fine and casual dining restaurants and 662,000 sq ft for commercial, office, retail and marine sales and services uses.

“At full build-out, the project will generate approximately $500m in private investment; support more than 2,000 direct, indirect and induced jobs; and generate $8.6m in new annual tax revenue for the city.”