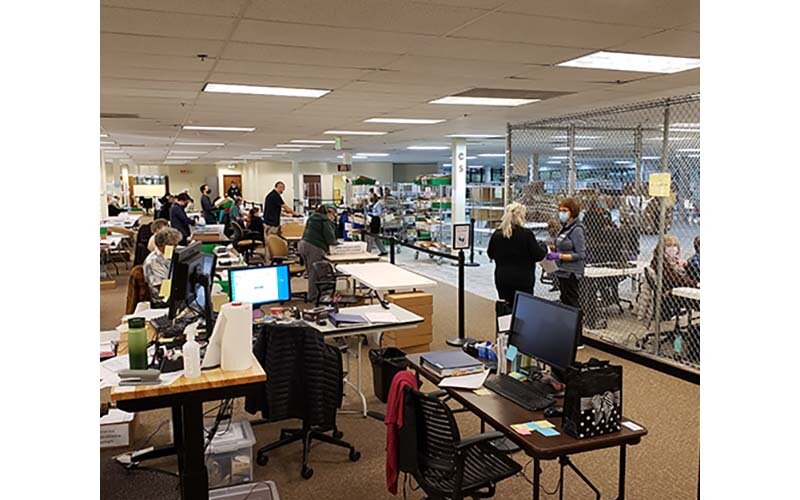 The votes are in and this election is over. How were votes processed and counted? I had the honor of being selected to help process Snohomish County ballots at the county elections processing center for our most recent election. The experience was fascinating and is an untold story.

It was secure, had integrity, accountability, transparency, accuracy and was meticulous.

The elections processing center has four key steps toward processing all the ballots and tabulating the votes. They are receiving/scanning, signature verification, ballot prepping, and adjudication. The space in the county elections ballot processing center was huge. Each of these functions was spread out in one large room, providing plenty of room and spacing to meet Covid-19 safety measures. Everyone in the building wore masks and gloves, and sanitation was frequent to enhance safety for all.

Voter ballots arrived in two manners, through the Postal Service and from the 30 different county election drop boxes. Using votewa.gov, everyone I spoke with that mailed their ballot said that it was ‘in the system’ the next day. Your mailed ballot was retrieved by your local post office staff, trucked to the Seattle processing and distribution center, and then delivered to the county elections ballot processing center at 5:30 AM the next morning with security on hand.

The next step was scanning the envelopes. In a corner of the large floor space was a large state-of-the-art scanning machine. This machine had several tasks. Powered by forced air, it scanned the envelope’s individualized bar code that identified the voter, scanned the signature, date and other information the voter provided, and sorted the envelopes into batches of 300 – all recorded in sequence for each batch. Using focused forced air, it opened each envelope along the bottom seam as it was scanned.

For those concerned about duplicate ballots, this machine is smart. If it encountered another matching bar code, it captured it for further action by staff.

Batches of 300 envelopes were placed by scanned order in trays. The trays were marked with batch identification numbers (IDs) and stacked on rolling racks, waiting for the next step.

In another part of the center, select trained staff compared the signature from the voter’s registration card and the one from the most recent ballot signature. The two signatures were compared side-by-side on a monitor, one at a time. If there was a discrepancy, it was referred to a special procedures group that followed up with the voter. This explains why your email address and phone number can be placed on your return envelope.

One question that arose is what if your signature evolves over time, is dissimilar, or your signature is different today thanks to a medical condition? The signature verification team follows up with the voter to address these kinds of issues.

Once the voter signatures were verified in each batch of 300, the ballots moved to the next step in the process.

Ballot preparation is where I participated with a team of about fifty. The process involved extracting the ballots from the envelopes and preparing them for tabulation. Yet, there was far more to this process.

First, I would check out a tray with a batch of 300 ballots from those who managed the inventory of batches. At my table, I then counted the ballots, separating them in groups of 20 envelopes, ensuring there were 300 envelopes. The scanning machine was not perfect and occasionally one or more extra ballots found their way into a batch. Working with a staff coordinator who used a printed list of names for that batch in order, the extra ballot(s) were found and removed, leaving the proper batch of tracked 300 envelopes documented on the batch tracking sheet. The extra envelopes were returned to join another batch soon.

Twenty at a time, each secrecy sleeve was extracted from each envelope, creating separate stacks for the sleeves and envelopes for all 300 in the batch. Remember the funny holes in the envelopes and secrecy sleeves? There is a reason for those holes. Upon finishing each 20 ballots, the envelopes were bunched together tightly so you could see through all 20 envelopes to ensure everything was removed.

Once all 300 sleeves were removed from the envelopes, the envelopes were rubber-banded together in groups of 60 with the batch number written on the last envelope. Per regulations, these envelopes are archived in a secured county warehouse for 22 months in case there is any need to review them for a recount or other legal reason.

Next, the ballots were removed from the secrecy sleeves, unfolded, inspected for any damage and/or additional marks or errors made by the voter. The most frequent damages to a ballot are coffee spills, ink splotches, and voters trimming the edges of the ballots like a shopping coupon. Voter errors included crossing out a vote made and not filling in the ‘bubble’ next to the chosen name or write-in. These kinds of ballots were separated from the rest and placed in special sleeves that those in adjudication will inspect more closely.

The ballots were again placed in stacks of 20. Like the envelopes, the sleeves are bunched together tightly so I can see through that funny hole to ensure everything was removed. The sleeves are saved for several months after the election.

I then recounted all the ballots to ensure I had 300. The ballots were then neatly stacked into a special fitted box along with any damaged or other ballot sleeves. The box was then fitted with its batch number tag, reviewed by a coordinator complete with signing off on the batch tracker form, and placed on an inventory rack where those tracking the batches prepared them for those in adjudication.

The whole ballot preparation process took about 60 to 90 minutes per batch. During the close elections elsewhere in the country in the wake of Election Day, you maybe saw video of ballot processing centers, and they often showed those preparing ballots to be tabulated. That was my task.

The final step in the center was the adjudication ‘cage’. This area had the tightest security in the center. Inside the cage were the tabulation machines where the ballots were scanned. For those ballots that had any questions or issues such as the coffee soaked ballots or extraneous or unclear marks, pairs of ballot evaluators sat next to each other in PPE viewing these ballots on large computer monitors and determined what the voter intended.

The scanners use the dashed markings to center the ballot as it ran thru the scanner capturing the image on both sides of the ballot. Those images were what were used to tabulate the votes for each race. Write-in votes were also captured.

The tabulations were saved in an ‘off the Internet’ set of servers, waiting for the evening of Election Day to be reported. Thanks to much of the early voting, over 70 percent of Snohomish County registered voters had their votes reported election night – a new record.

Observers including the public were welcome to view this whole process and many took advantage of this opportunity. The observers also included students, which provided a good civics lesson watching democracy in action.

We used red pens throughout the facility. Any other pens or writing tools were not permitted. There were no waste baskets. A few envelopes also included other original ballot mailing materials such as voting instructions, and some voters left the ballot stubs on that had to be removed. All such paper was taken away by the coordinators.

A few ballots included what we called ‘love notes’. Some of these notes were quite kind, thanking us for our service. A few others were – well, let’s just say they expressed their frustration.

And finally, this experience left me wondering – how many write-in votes Mickey Mouse has received over the years. Now you know more about how your vote was counted – a fascinating process with integrity and security so every vote counted.