“Skagit” isn’t ready for release just yet, but I was able to catch up with the writer and director of it, Nick Thompson, for some Q&A about how the
process works, why he (as a Seattleite and sixth generation Washingtonian) would venture so far North of the Sno-King line, and to learn a little about
film. Here’s a little of what he shared.

Nick was raised by two filmmakers, who have a business in the area creating films for nonprofits and other business owners. At age 11, Nick became obsessed
with horror films, and did his first shoot with cast, props and costumes. “But, it was writing, editing and directing that was more of what I’m interested
in.”

“My recent film projects include shooting and directing a music video for local band Salt Lick and the web series Douglas Fern’s Fact File, a docu-satire
chronicling Seattle’s history and rapidly changing cultural landscape. Both of these were zero-budget projects, and embody some of my central concerns
as a filmmaker: how to create film that articulates a particularly Northwest sensibility, and how to leverage the pure and poetic power of film to
approach some of the themes that I think define life in the Northwest: physical upheaval, anxiety about change, and a deep connection with the natural
environment.” 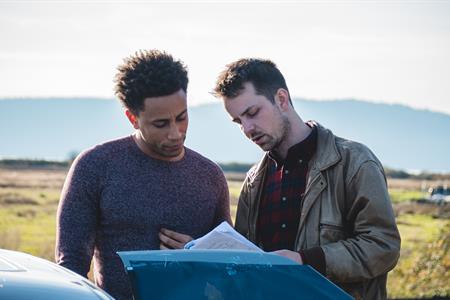 Is “Skagit” a feature length film, or a short film?

How many locations did you film in?

What is the film about?

The film is about four old friends from Seattle, in their mid-twenties, going to visit a family cabin in Skagit Valley for a long weekend. As the weekend
progresses, they’re all drawn into individual, surreal states. The main character, Elsa, tries to intercept the paths of her friends into the dream-like-state
while simultaneously being drawn into her own.

What can viewers potentially hope to see?

We know it’s very experimental and avant garde; it’s a horror film, with violence, young people, sex, with standard selling points as strategic pushes.
“It’s meant to get a hold of [the viewer] gradually.”

How did you come up with the idea for the film?

It starts with an idea, one that in this case, was inspired by events and people I know. I started taking pages and pages of notes. I wound up piecing
scenes together, organizing those notes and ideas, then printed them all out on paper and arranged them on the floor until a plausible linear timeline
evolved, then developed the script, cutting some parts for time. A lot of my best friends and family are artists willing to read the initial script.

It’s a good idea to have people with artistic tastes, but not necessarily “movie people” look them over, and I got a lot of feedback that way.

“Skagit hopes to communicates the culture of the Northwest through real, diverse locations and details of the characters’ words, fashions, and
attitudes towards their surroundings – I want people of the NW, especially my generation, to finally see themselves onscreen. I hope to achieve broader
recognition of the cinematic potential of the Northwest, an often-overlooked region of the United States. The Northwest’s character is in flux as climate
change and development impact the region, which alters the psyche, worldview and culture of its inhabitants. These are the same concerns are on display
in other experimental films I made in preparation for shooting Skagit. One of these films was The Cove Path, a short film composed of still portraits
and landscapes taken over several years in various Northwest locales. The characters, atmosphere, visual style and mood featured in the The Cove Path
served as a sketch of Skagit.” 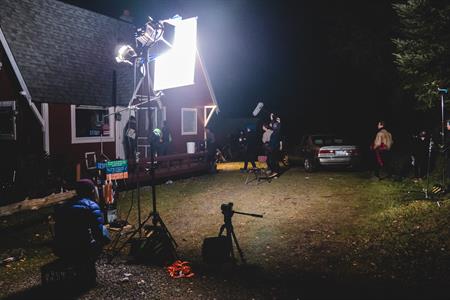 What happens after you decide to make a film? How do you get funding and other people excited about it?

“Our crowdfunding campaign will launch on IndieGogo in July 2019 to raise the funds necessary to finish the movie, principally to pay for the sound mix,
color correction, and score. These are really costly processes that are just as essential to making a film as writing or shooting it. The campaign
will most likely launch mid-July, last a month and is the most important part of what we’re currently working on (and what we’re spending the most
time on as a group) besides cutting the film itself.”

“And, start networking.” The film community is a small community, and people are excited to see you do well.

Who all worked on the film:

“This film was really such an amazing team effort, as it had to be, to get it made. All our cast and crew were local, working artists, almost all of them
quite young, and they took on multiple roles to make the movie happen. Everyone grew enormously on set and we saw several people move up easily into
higher roles than they initially signed up for, which was great to witness. The film was written and cast to intentionally reflect the diversity I
experienced growing up in Seattle’s South End, and many of the extras and bit parts are played by people we met while filming.”

Leah Trangen, Producer – Leah Trangen is an experienced producer and editor with a background in anthropology and documentary film. Her
recent projects include Vitch, an evocative exploration of the life and legacy of a Jewish caricaturist and mime artist who survived the war performing
in Nazi Germany, and Personhood, a provocative film about the “fetal rights movement” and the criminalization of pregnancy in America.

Hailey Williams, Associate Producer & Assistant Director – Hailey Williams is a Washington native. She is a graduate from the University
of Washington, with degrees in Cinema and Media Studies, Literature, and History. She started her filmmaking career by becoming Production Assistants
on 48 hour film sets, and slowly transitioning to an Assistant Director by her senior year of college. Hailey has been an Assistant Director for short
films such as ‘Coffee, Wine & Orange Juice,’ collaborated on professional and educational development projects such as ‘Stigma,’ and a PSA about
Dyslexia. Furthermore, she as also helped with production management on short films such as ‘Acid Test,’ and was the Assistant Director and Associate
Producer for the feature film ‘Skagit.’ Hailey now works for an educational philanthropic research organization as part of the Film Team.

Tracey Breese, Associate Producer – Tracey Breese is a film producer dedicated to telling diverse stories of social relevance. She’s
produced several narrative fiction short films as well as marketing videos for nonprofits. Most recently she produced and directed her own film, “Winter
Beach” (with a mostly female crew) about womanhood and aging, which screened at New York’s Nasty Women Unite Festival. She is a graduate of the New
School’s Media Studies program, focusing on production.

The names of our lead cast (about 99% of the film is just these four):

Want to learn more? Anyone interested can find out about the campaign and keep up to date with our progress, behind the scenes pictures/stories,
stills from the film, and eventually a teaser trailer (which will accompany the crowdfunding campaign) by signing up for our newsletter on our website
skagitfilm.com, which will launch in [the end of June]. People can also follow us at facebook.com/skagitfilm and on Instagram @skagitfilm, which we encourage them to do!

Kamiak Alum Featured in Film About Tibet and Basketball

Giving Locally During the Holiday Season

To many adults, who understand, blood draws are not... Read More.
Friday, May 13

You have probably heard that avian influenza (commonly called... Read More.
Thursday, May 12

According to unverified reports, SR 20 across the Cascades... Read More.
Previous Next