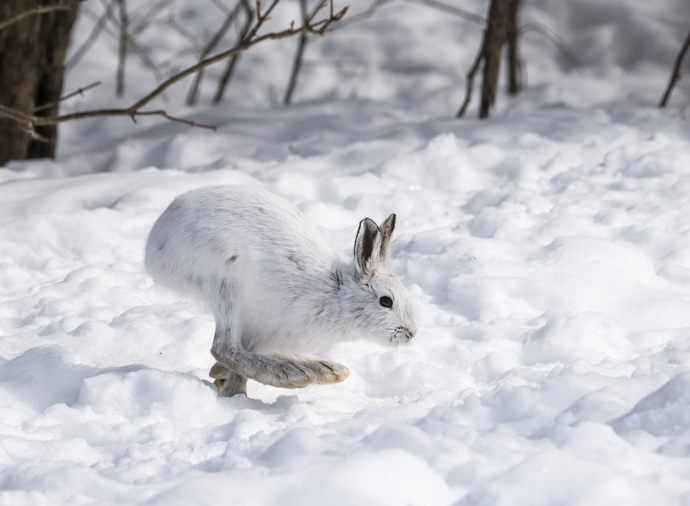 Looking for a fun family adventure this weekend? Instead of looking for eggs, go rabbit and hare hunting – WITH YOUR CAMERA. Rabbit hunting season is from September 1 – March 15 annually, for cottontail and Snowshoe hare, while pygmy rabbits (listed as endangered) and jackrabbits (in decline and a candidate for endangered designation) are forbidden year-round. This is because spring and summer are the primary breeding seasons to replenish the population.

People call all little hoppers rabbits, but there is a big difference. Both are part of a family named Leporidae which is divided into hares and rabbits. All species of hares belong to a single genus, Lepus, while the rabbit group includes 10 genera (Brachylagus, Bunolagus, Caprolagus, Nesolagus, Oryctolagus, Pentalagus, Poelagus, Pronolagus, Romerolagus, and Sylvilagus).

Rabbits are born blind and hairless. They need a lot of care for the first couple of weeks and are about a month old before they are feeding alongside their mothers. Rabbits tend to live in groups, and complex burrows underground, referred to as warrens.

Hares are born fully furred with eyes wide open and are hopping around within a couple of hours and feeding on their own. Hares are much more solitary. They have much longer ears, and hind legs, and make their nests or homes above ground.

Snowshoe hares are particularly interesting in that their fur can change colors. If they live in a snowy environment, they have white fur to help with camouflage. Their hind feet are quite large and furred with coarse hair. This enables them to stay above the snow instead of sinking into it. When the snow melts, they turn brown to blend in with their surroundings. In the lower elevations, they will remain brown all year. Here on the western side of the Cascades, they are mostly brown, unless you take a winter hike. You may also encounter them while skiing if you are sharp-eyed and can discern them in the snow.

Washington state has six native species: Nuttall’s Cottontail, Pygmy Rabbit, Pika, Snowshoe Hare, Black-tailed Jackrabbit and White-tailed Jackrabbit, and two non-native or introduced species: Eastern Cottontail and Domestic Rabbit. While called Jackrabbits, these two are actually hares. The Eastern cottontail is the one you most commonly see nibbling in your vegetable garden. They were introduced here in the 1930’s by hunters. The Domestic Rabbit is also known as a European or Belgian Rabbit and are the ones most often seen at fairs, and kept as pets. As always, a pet can escape and we all know, rabbits and hares are prolific breeders.

Both rabbits and hares feed early in the morning and late afternoon approaching dusk. Their trails are along hiking and biking paths and are 5 – 6 inches wide. During the day they are under bushes and shrubs off the beaten path and out of sight. They have incredible hearing, sight, and smell. When they detect motion, they freeze as an instinct to avoid being easy prey for hawks, lynx, fox, cats, and even raccoons. However, the slightest movement will cause them to flee. Don’t try chasing one, you will never catch it. Depending on the species they can run up to 60 – 65 miles and hour and leap up to10 feet in the air.

Best bet if you encounter one is to freeze yourself as well. Use your camera or cell phone and your zoom, while being as still as possible. If they are “frozen”, you will have a golden opportunity for some great wildlife pictures. If not, just spotting them in the wild is worth the exercise. It is a super fun activity especially for kids. If you opt for late afternoon, be sure to check sunset times and clock you hike going in and leave yourself enough time to hike back out before dark.