ARLINGTON, Wash. – Several hundred years before the first Viking explorers attempted to settle North America, a small seed was taking root in western Washington.
Over the course of 1,400 years, that seed became a tree which now stands more than 250 feet tall and 11 feet thick. A community of such rare ancient
trees thrives within 275 acres of a carefully preserved old growth forest surrounding Naval Radio Station Jim Creek in Arlington, Washington. The woods
and wild lands were forever set apart as a natural area, largely due to the proactive conservation efforts of the Navy in the Pacific Northwest.

The area provides quality habitat for many native creatures, one of which is the marbled murrelet, a small Pacific seabird known as a fast flier with
rapid wingbeats and short wings. These birds are federally listed as ‘threatened’ under the Endangered Species Act in Washington, Oregon, and California.
Marbled murrelets are known to fly up to 50 miles inland to lay eggs and rear young in the old growth forest of NRS Jim Creek. Thanks to the Navy’s
natural resource stewardship, this old growth forest area is protected and continues to provide quality nesting habitat.

In 1992, the NRS Jim Creek old growth forest was about to fall to the chainsaws of the Scott Paper Company when the Navy purchased the timber rights
to land the Navy had already owned for $3 million. The purchase accounted for 30 percent of the Department of Defense’s Legacy Resource Management
Program annual funding. At the time, it was the single largest natural resource conservation project ever funded in the DOD. 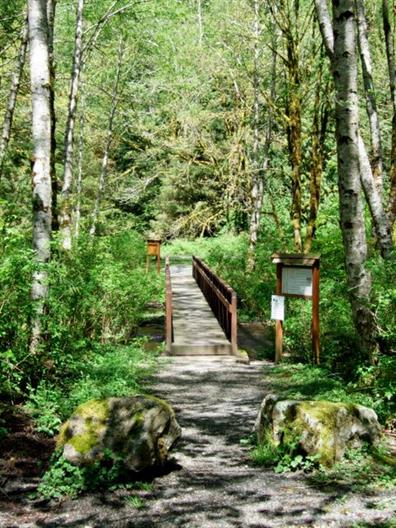 However, saving the old growth forest was a close call. Back in 1950, the Navy purchased 4,827 acres in the Cascade Mountains to build a radio transmitting
station that provides communication support for the Pacific Naval Fleet. The initial purchase did not include forest timber rights. Since the old growth
forest area was situated in a narrow mountain valley with few nearby roads, much of this area was skipped over from initial timber harvests that occurred
roughly from 1900 – 1950. Native species that continued to flourish here include Sitka spruce, Douglas fir, western red cedar, and western hemlock.

In 1990, after Scott Paper had announced their plans to begin logging there, the DOD was still working to obtain funding for the purpose of preserving
the nation’s natural and cultural heritage. Congress eventually passed legislation that provided necessary financial assistance, allowing the Navy
to acquire the old growth forest by offering Scott Paper a second growth timber harvest of equal value in exchange.

Today, only foot traffic is allowed to tread inside this ancient forest of behemoths. This intact forest and complex of wetlands is some of the best
quality in western Washington. The forest supports a healthy and vibrant understory of plants adapted to this unique environment that was once common
in the Cascade foothills.

While plant communities of old growth forests naturally change over time, the longevity of the NRS Jim Creek old growth stand is a testament to the
meaning of biodiversity. Old growth stands containing a variety of plant and animal life are better able to maintain their valuable diverse habitat
qualities after a natural forest disturbance much better than younger developing forests.

The Jim Creek installation’s many undeveloped acres provide a sustainable environment for a diversity of fish and wildlife species such as deer, bobcat,
black bear, the American pika (smaller, rodent-like relatives of rabbits), and the Salish sucker (a rare bottom-dwelling fish found in fresh water
lakes). Connecting streams provide unobstructed habitat for migratory salmon. These natural resources are managed through implementation of an Integrated
Natural Resources Management Plan, developed by the Navy installation cooperatively with other natural resource agencies. The plan is being updated
to provide continuing environmental stewardship.

Naval Station Everett is the installation that manages the environmental stewardship plan for Jim Creek and other Navy-assigned areas of responsibility.
Plan initiatives are modeled after the DOD’s Legacy program and focused on protecting natural and cultural resources, while enabling military readiness.
Through continuing collaboration with the Stillaguamish Tribe, the United States Fish and Wildlife Service, and the Washington Department of Fish and
Wildlife, the program strives to incorporate knowledge and talents from within and outside of DOD. This cooperation is integral to develop and update
the Integrated Natural Resource Management Plan on a regular basis and achieve many beneficial stewardship objectives.

“This project is a shining example of the DOD’s concern for our nation’s natural ecosystems,” said Thomas Dildine, Environmental Program Director
at Naval Station Everett. “This old growth forest is a highly specialized ecosystem which provides habitat for many unique plants and animal species
and preserves them for future generations.”

While the nation’s military provides protection for the United States and her allies, the DOD likewise maintains a strong conservation effort at all
of its locations. Creatures of all kinds congregate on the vast holdings of our military sites. The DOD manages and protects 400 threatened and endangered
species on 25 million acres of land, across 420 military installations. The department now manages more species per acre than any other federal agency,
including the National Park Service, U.S. Forest Service and U.S. Fish and Wildlife Service.

“The old growth forest at Jim Creek will remain a diverse ecological legacy and natural classroom for coming generations to cultivate knowledge from
the past and grow forest habitat objectives for the future, said Navy Regional Forester, Terri Jones. “Its benefits are priceless.”

Take a Trip Down Harvey Creek