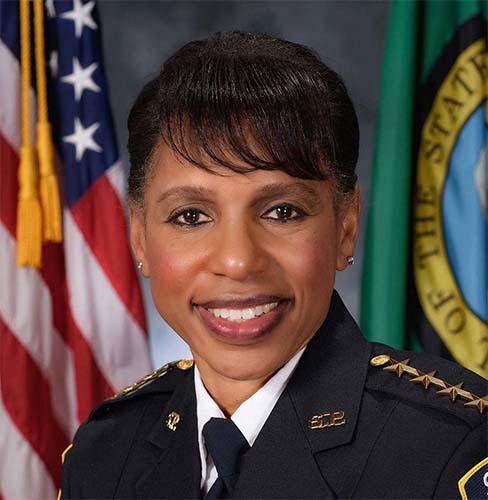 Seattle Police Chief Carmen Best (Ret) will be at the Historic Everett Theater, Friday June 17th at 6:30 pm for short readings from her new book, Black in Blue, questions and answers, and to sign copies of her book. She will provide great insight into her 28 years as a woman of color with the Seattle Police Department and becoming Seattle’s first Black, female Police Chief.

She broke many barriers and glass ceilings during her career. She currently manages a global security account, spanning five continents, and is an MSNBC Contributor as a Police Policy Expert. In her new book, Best is open about the doubt she felt at times as a police officer and a Black woman, and as the first Black woman to lead the Seattle Police Department.

She received the “Newsmaker of the Year” award from the Seattle Black Press, the “Vision from the Mountain Top” award from Urban Impact for her commitment to justice and community, the “Influential Woman of 2020” award from the Puget Sound Business Journal, the FBI National Executive Institute Associates (NEIA) National Law Enforcement Ethics Award 2020, and the Leadership Award from Major Cities Chief’s Association 2020. She was awarded the prestigious Ellis Island Medal of Honor (2019), dedicated to recognizing individuals who selflessly contribute to society and uphold the ideals of America, an award read into the Congressional Record.

Additionally, Ms. Best was nominated for an Emmy Award for her work on the public safety announcements “Safe in the Sound.” Most recently she was awarded the 2022 “Women Can Do” award from the Honorary Consul of Sweden, and the 2022 recipient of the “Woman of the Year” award from the National Police Defense Foundation amongst many other recognitions.

Doors will open at 5:00 pm and the event is free. Do not miss the opportunity to hear from this dedicated, highly successful, and influential leader.