Leonard J Martin: We Were Outnumbered, An Oral Retelling of a POW Experience

Leonard J. Martin was captured on October 31st of 1944 and released April 13th, 1945. He had enlisted into the armed forces in August of 1943 after graduating from Snohomish High School the previous Spring.

Leonard J. Martin is a 94-year-old local and prisoner of war, and this is how I met him. Outside of the news station, a morning personality from our country
station,Classic Country KXA, Stitch Mitchell, happened across a card with Shriner symbology and some contact information on it, laying on the sidewalk. It was a little crumpled and may have been in the elements for a while, with legible but shaky handwriting printed on front and back. In all upper-case military style letters, there was an arrow across the top inviting you to flip it over. 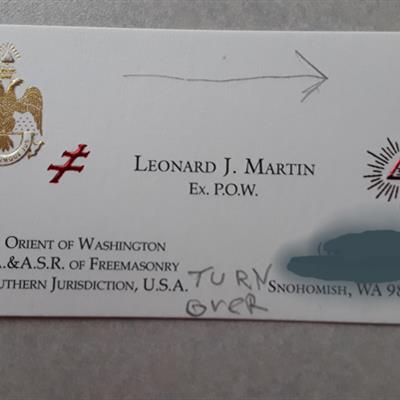 It was an invitation to sit, listen and learn about Leonard and his life and times.

The card lived on my desk for days, in my peripheral as something I should attend to as the sunlight caught the embossed characters and tossed it back
into my eyes like a beacon. So, I took him up on the invitation.

On a sunny Sunday, I called. Leonard answered right away and invited me into his home the following weekend. When I called to remind him before the interview,
he’d forgotten what was planned but remembered enough to have a family member pull out a large, heavy suitcase and leave it by his favorite chair.
The case was full of items from his POW experience, and each had a story to tell.

On his walls are pictures of family and more clocks than I could count, hurricane lamps, coffee cups from around the world when he traveled with his wife.
Leonard calls me “love” and “hun” and invites me to sit.

And so it began, but introductions first. He introduced me to his cat, Bella Luna; “It means beautiful moon,” he explained. Bella Luna is pure white, with
dramatic, heterochromatic eyes. “She’s my girlfriend,” he said with a laugh. She doesn’t want much to do with me, but she does curl up on my Everett
Post jacket, dry-cleaning be damned, sitting in a matching blue recliner across from Leonard.

In order to get to the items in the wheelchair, I’m instructed to move his walker back and away, so there’s room on the ground near his feet. I rolled
his walker away, over to the corner, for optimal viewing space, and moved the heavy suitcase to him, so I could hand items up to him. I found myself
seated directly at his feet, as cozened as if we were fireside and I at his knee; it’s a scene as ancient as family life, youngsters gathered round
the hearth while tales are told. I was even sitting crisscross-applesauce. At the time, I reflected to myself that the older I get, the older young
becomes, and at 35 to his 94, I was definitely just barely more than a baby again, even with my right hip sending signal flares of discomfort at me.

The first item to pull out of the suitcase was a big woolen bag, the color of coconut fibers. It was about eighteen inches square with a strap to go around
your neck. “Now it’s not to say that I was a prisoner of war with men that were bad men. But things were hard for them, too, so each man carried everything
with him, everywhere he went. Even to the toilet.” His hands are steady and his knuckles knobbed and shiny with age as he placed the bag around his
neck and posed for a photo. No stranger to storytelling was our Leonard, born in a time of Model T’s and up to cell phone cameras. He has handled them
all. He invited me for a selfie. So, I did that too. 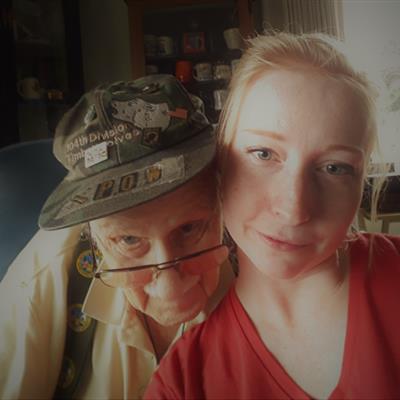 Next up was a “a nearly useless blanket.” The blanket was made of wood fibers and issued to each POW upon reaching their camp. He never disclosed the name
of the camp, and I didn’t ask, but a little research tells me it was very likely Stammlager, near Fallingbostel, where he dismounted the boxcar
he was forced into in Holland.

“We laid on the straw ticking – like a big sack with straw. The only way to make them work at all was to lie as man and wife to trap in body heat.” Leonard
cupped one hand over the other, one broad palm to the back of the other hand. Used alone, they provided no heat. He was kept in “barracks” with the
other POWs, in cells that were ten foot by ten foot, and kept ten men apiece. The heat was produced by a small wood strove kept at one end of the barracks,
and only when trash needed to be burned.

From the suitcase, he then produced clippings from our local Herald from when he was captured, dated November 1, 1943, precisely one day after his capture.
He also had the clipping from when he was released, kept by his parents, and sand from the beaches of Europe, among a plethora of other items.

There were three different types of grenades, a replica of his side arm and a folding knife emblazoned with a wolf on the side. “I was in the 104th Infantry Division, the Timberwolves,” he explained, unfolding it so I could see. The wolf was as proud as he and shone with a matching bright light
in the morning sunshine.

“Oh, and I got a Purple Heart. Not for being shot, though.” Leonard was awarded a Purple Heart because of medical injuries sustained while working in the
bitter cold outside, without the benefit of gloves or a mask. Later in life, he said that as a result of that, his lungs were compromised and he wound
up losing the bottom half of his left one. That part of his lung was removed through his back.

I asked him to tell me about the capture, if it wasn’t too hard for him. How did it happen? “Like it always does, love. We were outnumbered,” he began.

Anecdotal side note: The phone rang and interrupted the breathtaking retelling of his capture, which Leonard picked up. Through the receiver, I could hear the tinny sounds of what was obviously a scammer, threatening to turn off his social security if he didn’t immediately comply with trumped up tax evasion charges. To my mounting horror, Leonard pressed a button to be connected to someone about the issue. This was not an eventuality I was prepared for. I stared, urgently wondering what action to take.

The call disconnected and he leaned back in his chair and laughed. “That’s how I take care of that. You know how many gol-durned calls I get from them a day? Probably six.”

That was easily the best surprise of my week, and my best laugh, too. 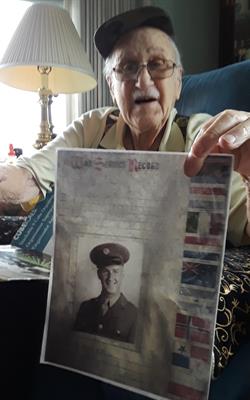 “So, the capture,” he began again. Leonard was captured near Breda, in the Netherlands. “We were along the water, probably a dike. They are everywhere
in the Netherlands. What happened is a German Tiger tank came upon us – they’re about 60 tons – and started firing rounds at us.” He held his hands
up, roughly the circumference of an orange. “Big rounds. They just opened up on us.” (Research showed me they were 8.8 centimeter or 88mm rounds. Enormous
and deadly. Tigers were their own class of “heavy tank” with remarkably thick armor. Too heavy to cross most bridges in Europe back then, so they could
pass through 15 feet of water at a go.)

“They mowed us down to twenty guys, and my company was close to two hundred. That’s the average size of a company, anyway. So when it was down to just
the twenty of us, there’s no way to fight a tank, so we put our hands up.” He raised his hands above his head, then turned his palms upward, to say,
“what else could we do?”

After that, they were taken to a hospital and checked out, to make sure they were all in good enough health to survive internment or forced labor at “work
camps”. He walked for a few miles to a boxcar meant for 40 men and was forced in with 109 others, standing room only, as they made their way from the
Netherlands to Germany.

The next item I pull out of the suitcase, he declines to accept and tells me to take it from its bag. It’s a petrified hunk of bread, which he baked himself.
It has no discernible smell or mold, and I place it carefully back into the bag. It is as hard as any rock you’d pluck from a riverbank. “I lost 65
lbs during the time I was captured. That bread is made of oat, wheat, rye, barley… and thirty percent sawdust. Once a week, the ten per ‘cubicle’
of us were given one loaf, and that’s all we got. Ten men, one week.”

Why was he and the other men released? “The Germans had advanced too far and couldn’t maintain the camps. There no longer an advantage to do it.” By then,
he guessed, they knew how the war was turning and POWs just weren’t so important to them.

“After we were released, I was sent to a clinic. I had developed jaundice and needed treatment for two or three weeks before I could be well enough to
travel back home.”

So it came to pass that Leonard returned home to his family farm in Snohomish, married, had children, and just about seventy five years later, I am in
his tidy home, hearing the retelling of the tale. And now you have as well.

“Are you afraid of being killed? I don’t know why my gunner asked me that. Who could answer that type of question? After that, I was ordered to move across a one hundred acre field, in order to meet up with A Company. I was a second gunner to the first gunner at the time, with a .30 caliber. I fed the rounds in, on belts. Moving across, I heard a rat-a-tat-tat gunfire, which I knew was not our rrrrt-rrrrt-rrrrt. It wasn’t ours, but they opened up and we returned. Men around me fell, and I, not knowing, laid among them for a long, long time. I thought I had died. Eventually, the enemy moved off, and I crept, like this, (rubs fore and middle finger together like cricket legs in slow motion) until I could run to a foxhole.”

Someone told me I had to go back, and I told him, “are you crazy?” but he told me I was now first gunner, it was my responsibility, and I went back three times into that field. Once for my gun, then the bullets, then the tripod.”

“We had three kids in thirty months and then I found out what was causing it.” 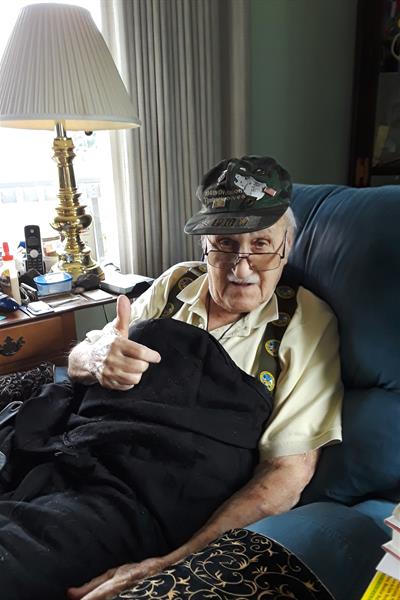 My Experience at the Death Café in Everett