He’s worked as a Congressional campaign manager, a crime reporter, owned his own photography studio, and was a freelance photographer for the Associated Press. Nowadays he owns a production company called Viking-Dog Films outside of L.A. where he writes, directs, and acts in television and film. His name? Eric Paul Erickson.

Recently, the movie star has released a new movie called “Truth” that he directed and stars in about an accused war criminal who is offered amnesty if he admits to a dark past.

Although, Erickson says his movie is about much more than that, “It’s about being careful of what you wish for… It’s about what happens if someone gets the chance to dig up the secrets from your past, and how far will you go to get the answers that you seek and what type of person are you willing to become.”

But before he moved to California where he’s starred in over a dozen movies and tv shows, he had to practice. Born September 2, 1972, in Bellingham, WA. Erickson and his family moved to Friday Harbor where his family is well known to the community. “My family is one of the main families that helped found the town, ‘The Erickson Family’. My grandfather was the sheriff and my dad designed the golf course and then started his company there,” said Erickson.

After a few years in Friday Harbor, his parents divorced, and he went to live with his mother. “We moved all over the place, Everett, Arlington, and Mount Vernon.” Erickson went on to graduate from Mount Vernon High school and continued his education at the University of Southern California’s School of Theatre.

“I knew I wanted to tell stories of some type since I was young,” said Erickson. “I just didn’t know what form it would come out in.” Writing his first play for his church when he was only 14 years old, the soon-to-be renaissance actor was producing things before he was even out of high school. 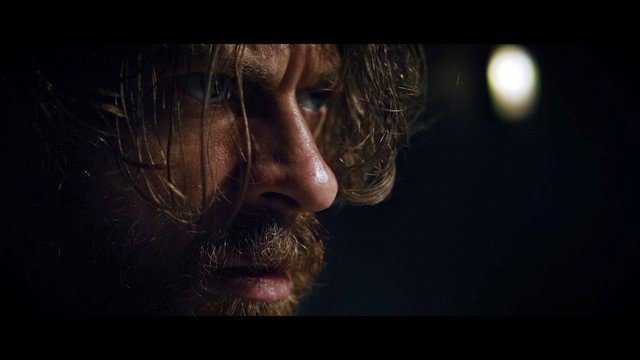 Growing up, Charlie Chaplin and Orson Welles were some of his inspirations. He liked how they did more than one thing. Erickson expressed how he was never happy just doing one thing. He wanted to tell stories whether it was as an actor or a writer or producing, it was about the art and the expression and finding the right arena to work.

After graduating from college in 1994, Erickson grew tired of the L.A entertainment industry, so he decided to become a journalist. “I worked for the Roswell Daily Record in New Mexico and then I ended up at the Chicago Tribune where I was basically a crime reporter,” said Erickson. After writing, he bounced around doing a few other things such as being a photographer for the Associated Press, running a Congressional Campaign, and opening his own photography studio. It was after all of these life experiences that he truly felt he was ready to start telling his own stories.

Back when Erickson was in college, he had applied to the University of Washington Playwriting MFA program. “I had this interview with this woman, and I remember her being so nice to me, but she turned me down flat because she said I don’t have the life experience to be a writer yet because I was only twenty,” said Erickson. He explained that at the time when she told him that, he was very upset. But, looking back now Erickson says she hit the nail right on the head. He didn’t know anything.

For Erickson, writing, acting, and directing have always been about the adventure and the experience. Through his ups and downs, Erickson has stayed true to his beliefs, and if given the chance to go back and change things he wouldn’t adjust a thing.

A few years ago, Erickson lost a close friend he met back in college. His passing flipped a switch in Erickson’s head that if he had a dream, he better go reach for it. “That was the experience that forced me to look at my life… It installed this sense in the back of my head of how limited the time is that we have and how it can vanish at any moment. It put a clock on my life,” said Erickson. 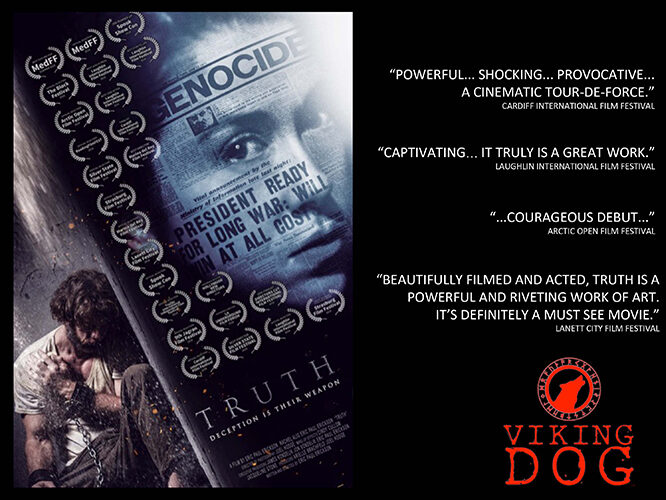 Just two weeks before “Truth” was to be released it was pulled back for multiple technical issues. It seemed like no matter how prepared Erickson thought they were, the littlest thing would pop up and grind their progress to a halt.

Once the movie was completed, Erickson submitted it to numerous film festivals all over the world. So far, the movie has earned nine film festival awards ranging from Best Lead Actor, Best Lead Actress, and Best Director, to Best Feature Film and Best Storytelling. In addition to the nine awards, “Truth” has earned 8 selection awards.

“It was incredibly well-received at every film festival that I went to,” said Erickson. One festival that stuck out to him was the 2018 Arctic Open Film Festival in Arkhangelsk, Russia near the Arctic Circle. “I had a handler who was a Miss Russia contestant who helped me as a translator and to make sure I didn’t do anything culturally insensitive,” said Erickson.

“Truth” was shown two days in a row at the Arctic Open Festival, the first showing was to a younger college demographic on a Saturday and the second was to a much older group of people on Sunday, mostly over the age of 60. “My handler warned me not to take it personally if no one showed up to an early Sunday morning show, we walked in and it was completely sold out. Hundreds of seats sold out.”

After the screening was over there was a Q&A with the audience. What Erickson wasn’t prepared for was the realization that the region he was in has lived through many of the things that play out in his movie. “One woman stood up and said when her mother was taken away by the secret police that’s what happened to her… That’s when it hit me that it was such a different take away than any other group that I’ve shown this to,” said Erickson. It humbled him.

Erickson said he took things from his own life and used it to portray the main character of his film. While in the process of filming the movie, Erickson and his wife separated. “I drew on the emptiness that I was feeling because that was literally the only thing that I had at the time and so I tried to reach into that chasm,” said Erickson. “I think there were a lot of parallels between the main character and me because it’s a guy who’s lost all hope. He’s been locked in a hole for a year… These are very similar feelings as when you go through a divorce so that’s what I was drawing on.”

Whether it’s violence, or war, or refugees, or ‘me too’; Erickson hopes someone resonates with the story and that they walk away with something personal.

If you’d like to watch “Truth” it’s available for streaming on VUDU. Due to COVID other streaming sites will pick up the movie within the next week such as Google, iTunes, and Amazon Video. But if you’d like to own the Blue-Ray copy you can get it off Amazon now. Click here to watch a preview of his film.

Also, Eric is releasing a new SY-FY novel this fall called, “Ascension”. To find out more about “Truth” and “Ascension” go to Viking-Dog Films. 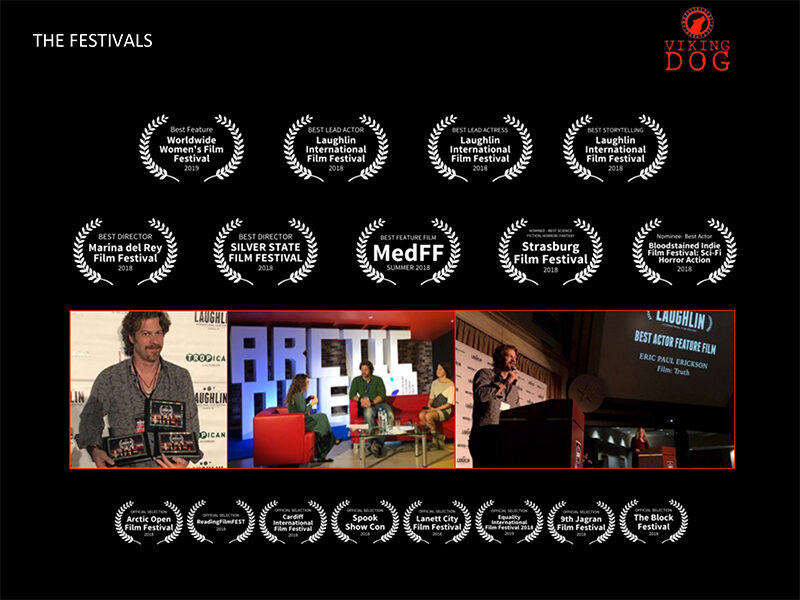