Jean Rittmann is alleging that the McDonalds at 2001 Everett Ave is in violation of multiple laws, that the city is aware of it, and nothing is being done
about it. “It’s corruption, plain and simple,” Rittmann says.

She parked three vehicles festooned with “McDcheats.com” and allegations of City Fraud along the avenue which runs behind the restaurant at five AM Monday
morning (6/4/18), before parking herself outside as well. She also brought multiple copies of a home printed flyer, which she was passing out to anybody
interested. 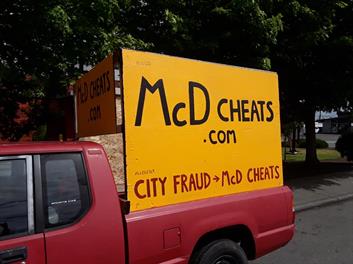 The dumpster itself is secured, and has a high wall behind it to separate her property from the restaurant, which she alleges isn’t high enough to meet
municipal code. She also alleges that there should be sight-obscuring tall trees or shrubbery to block the view, smell and sounds.

Rittman allegations range far and wide; lack of sight obscuring Type 1 landscaping, insufficient soil behind the dumpster, the drive-thru board not allowed
within 100 feet of residential property, repetitive noise and nuisance violations, and that the second drive-thru aisle is a zoning violation, among
the list of allegations. She even believes that McDonalds never qualified for a use permit. On her website, Rittman cites City Planner John Jimerson, Land Use Planning Manager Steve Ingalsbe, and the Director of Planning and Community Development
Allan Giffen specifically and repeatedly. She goes on in her website to say that she feels “raped” by the circumstances and doesn’t have the means
to take anybody to court. She’d tried on her own and made an error on the paperwork, which Rittmann says precludes her from any follow up action inside
of a courtroom.

This reporter reached out to the McDonalds for comment and a staffer shared that they “didn’t know what it was about,” in reference to her picketing. The
City of Everett responded to calls but ultimately declined to comment.