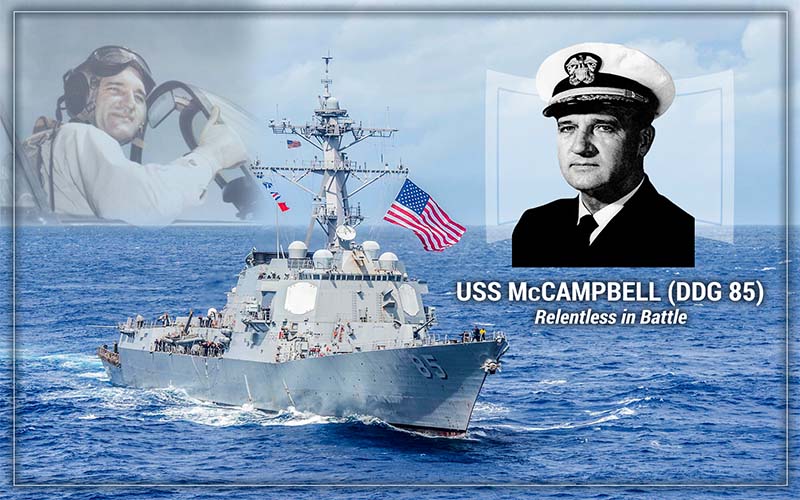 Naval Station Everett, and the entire Everett community extends a warm welcome to the USS McCampbell (DDG 85). This Arleigh Burke-class guided-missile destroyer has been assigned to a new homeport at Naval Station Everett and arrived this afternoon, Friday, April 8th, around 4:00pm. Those with views of the channel may see it start transiting by about 3:00pm heading to dock. This ship was previously at a Portland shipyard undergoing a Depot Modernization Period, so she arrives fully ready for service. Naval Station Everett is home to more than 4,000 military and civilian personnel working on base, most of that number is military, with civilians totaling about 1,000.

Everett is the ship’s new home and the crew will live in the community. Like the crews of other Everett based ships, when sailors are not on duty, they will be out and about in their neighborhood and the local area. The ship always has people aboard who are on duty. During the week, they go to work aboard the ship like any other community member would go to their job. While in port, they conduct maintenance, training, and administrative duties to prepare for future deployments or other missions. The USS McCampbell has a crew of more than 300 sailors on board.

These warships were designed as multi-mission destroyers, able to fulfill the strategic land strike role with Tomahawk missiles; anti-aircraft warfare (AAW) role with powerful Aegis radar and surface-to-air missiles; anti-submarine warfare (ASW) with towed sonar array, anti-submarine rockets, and ASW helicopters; and anti-surface warfare (ASuW) with a Harpoon missile launcher. With upgrades to their AN/SPY-1 phased radar systems and their associated missile payloads as part of the Aegis Ballistic Missile Defense System, the ships of this class have also begun to demonstrate promise as mobile anti-ballistic missile and anti-satellite weaponry platforms, operating on fifteen ships as of March 2009.

In September 2005, the Arleigh Burke-class ships became the U.S. Navy’s only active destroyers, until the Zumwalt class became active in 2016. The Arleigh Burke-class has the longest production run for any post-World War II U.S. Navy surface combatant. Besides the sixty-two vessels of this class in service by 2016, up to a further forty-two are envisioned.

With an overall length of 505 to 509.5 feet, displacement ranging from 8,230 to 9,700 tons, and weaponry including over ninety missiles, the Arleigh Burke-class are larger and more heavily armed than most previous ships classified as guided missile cruisers.

If you happen to see one of these new dedicated men and women out and about in our community, be sure to welcome them and thank them for their service.