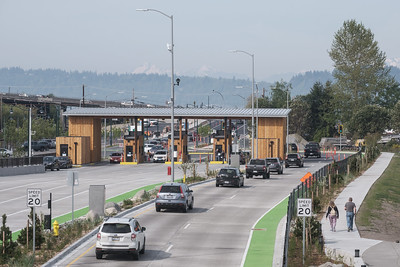 Just in time for Memorial Day Weekend, the new Mukilteo ferry terminal has crossed the finish line. The $187.3 million dollar project to upgrade and relocate the old ferry terminal has just completed the paving and traffic signal installation on First Street, increasing the capacity of the holding lanes by 50 cars and marking a completion to the project that began construction phase 1 back in July 2015.

With over 4 million annual passengers, the new terminal is a breath of fresh air for its daily commuters. The new terminal includes a new walk-on passenger bridge and a rich display of Native American art that local tribal artists provided for the passenger building.

According to the press release, the new First Street consists of two lanes in and two lanes out of the terminal to help ease traffic flow at the facility. “The traffic light boosts safety for pedestrians crossing SR 525 on their way to the waterfront, Lighthouse Park and the ferry,” said the release.  Additionally, the signal will be timed for the busy summer season and then adjusted for the slower winter season on the route.

Grab a mask, load up the car and go on an adventure!