North Everett is Getting “Pioneer Place”

This feature is brought to you directly from the Skotdal Real Estate team. They have some very lofty goals for 2828 Colby. See below for the full press
release.

EVERETT, WA – August 22, 2018 – With the arrival of Funko on the corner of Wetmore and California Street one year ago, downtown Everett officially became
the headquarters of a prominent local company with a global reach. Can it happen again? Skotdal Real Estate aims to find out. As part of a decades-long
effort to transform Everett’s urban core, the company is currently renovating the former Opus Bank Building at 2828 Colby Avenue. The initiative is
being led by the firm’s two partners, Andrew and Craig Skotdal, with a goal of attracting at least one major employer to the heart of downtown.

“As more Seattle-area companies feel the pressure of rising costs and demand for space, now seems like the right time to make the case for Everett,” said
Craig Skotdal. “Our goal is to upgrade the building and make it appealing to a major employer who understands the value of an urban location for their
business and employees.” Located on the northwest corner of Hewitt and Colby, the landmark office building is near several housing, retail, and entertainment
options. It also features convenient access to nearby transit and parking facilities, including the 495-stall Everpark Garage adjacent to the building. 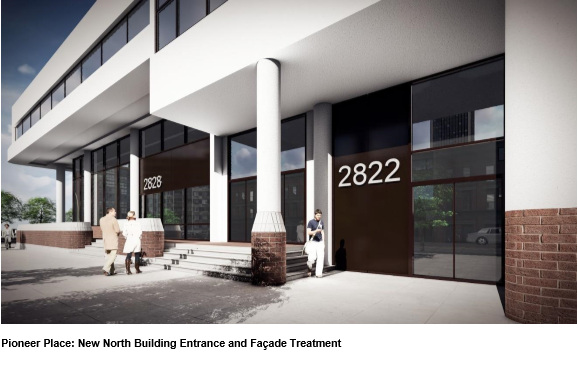 Besides the convenience of location, announcements by Alaska, United, and Southwest Airlines about their plans to bring service to Everett later this year
make the opportunity to attract a major employer even more viable. “We’re excited to share this opportunity with Puget Sound employers who may be considering
a move to Everett, especially with passenger air service becoming available at Paine Field,” said Andrew Skotdal. “With flights from Everett to destinations
all along the West Coast, a downtown office location becomes even more attractive for companies that operate beyond Puget Sound.”

As an incentive for major employers, the City of Everett currently offers a new jobs tax credit of up to $500,000 for the creation of at least 50 new jobs.
As an additional incentive, Skotdal Real Estate is discounting the rental rate for any headquarters tenant willing to occupy the entire 52,500 SF building
with a starting price of $11.00/SF plus operating expenses – a value far below comparable office buildings in Everett and the greater Seattle area.
“With median office rates approaching $49.00/SF in Downtown Seattle and $29.00/SF in the Seattle Metropolitan Area, this location offers tremendous
value by comparison,” said Craig Skotdal.

While landing a headquarters company is a key objective, Skotdal Real Estate is also targeting local employers in aerospace and manufacturing whose existing
facilities may be limiting their ability to expand. The company’s improvements will allow the property to be easily subdivided for multiple tenants
depending on market demand. “This is a great opportunity for aerospace manufacturers to free up much needed industrial space for their day-to-day operations
by relocating their administrative personnel to cost effective office space in downtown Everett,” said Andrew Skotdal. “With very little industrial
space available in the market today, employers need to be more creative with how they use their existing facilities.” 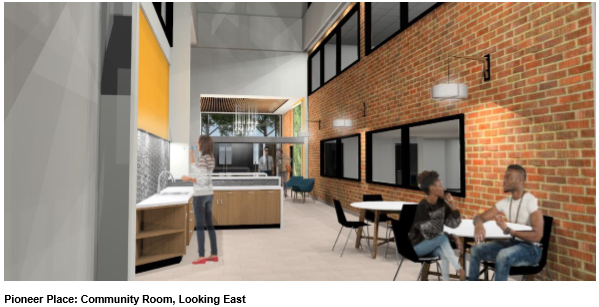 Building Background & Overview: The subject building has a long history as the headquarters of Cascade Financial Corp. prior to its acquisition by
Opus Bank in 2011.In the following years, Opus realigned its operations and relocated its branch to 2901 Rucker Avenue. The property was listed for
sale by Jones Lang LaSalle in June, 2013 and subsequently re-listed by Marcus & Millichap in October, 2015. The Skotdal family purchased the property
in late 2017, adding to their portfolio in the city center.

The 52,500 SF former financial center consists of two 4-story office buildings that are connected by a 3-story atrium. The north building contains approximately
27,500 SF of office space on four floors. The south building has two floors of office and a double height retail / service center space with a mezzanine,
all of which comprise approximately 25,000 SF.The south building was constructed as the headquarters for Cascade Savings & Loan in 1976. The north
building was originally constructed in 1920 and later modified by Cascade as part of its expansion in 1984.

Building Renovations: As part of its improvements, Skotdal Real Estate is creating a new Colby Avenue entrance for the north building, making it more functional
and accessible. Portions of the existing Colby façade will also change to include contemporary metal panels and modern street address numbers that
will be illuminated at night. Existing smoked glass windows will be selectively replaced with clear glass to maximize views and natural light in offices
and common areas. Additionally, the north and south building entry lobbies are being completely refurbished and accented with decorative lighting fixtures. 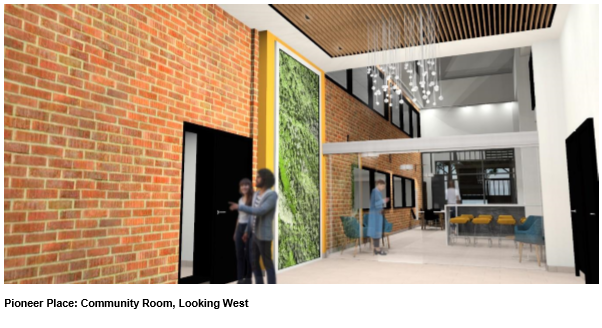 In addition to upgrading the exterior and interior finishes, the company is making the property more accessible. Skotdal is installing a new elevator
that will serve the north and south buildings along with new bathrooms that conform to the Americans with Disabilities Act. “ADA accessibility
is often a requirement for larger companies and government agencies, so we want to be sure the building can accommodate that need,” said Andrew
Skotdal. The company anticipates completing renovations and beginning occupancy of the building later this year.

Community Room: As part of its renovation strategy, the Skotdal Real Estate is completely overhauling the focal point of the property, a 3-story atrium
that physically connects the north and south office buildings. The light-filled space is being transformed into an amenity lounge for all occupants,
encouraging social engagement among professionals working there. The community room can also be used for company meetings and events.