Matthew from Bothell said it best this morning, “This is my first time riding the light rail. I’m hoping to make this a regular thing.”

The latest light rail extension from the Husky Stadium station to Northgate opened this past weekend and today was the first commuter workday for the new light rail extension. Community Transit and Sound Transit ambassadors along with many signs were on hand at the Northgate, Roosevelt, and U District stations to help commuters easily navigate the transition from buses to the light rail, and all looked to run quite smoothly.

Rachel of Lynnwood said, “I am excited, a lot of people will be happy about this new connection.” Students, nurses in scrubs, and people in suits were among the commuters giving this new mode of transportation a try. Several students noted, “Glad it’s finally here!” 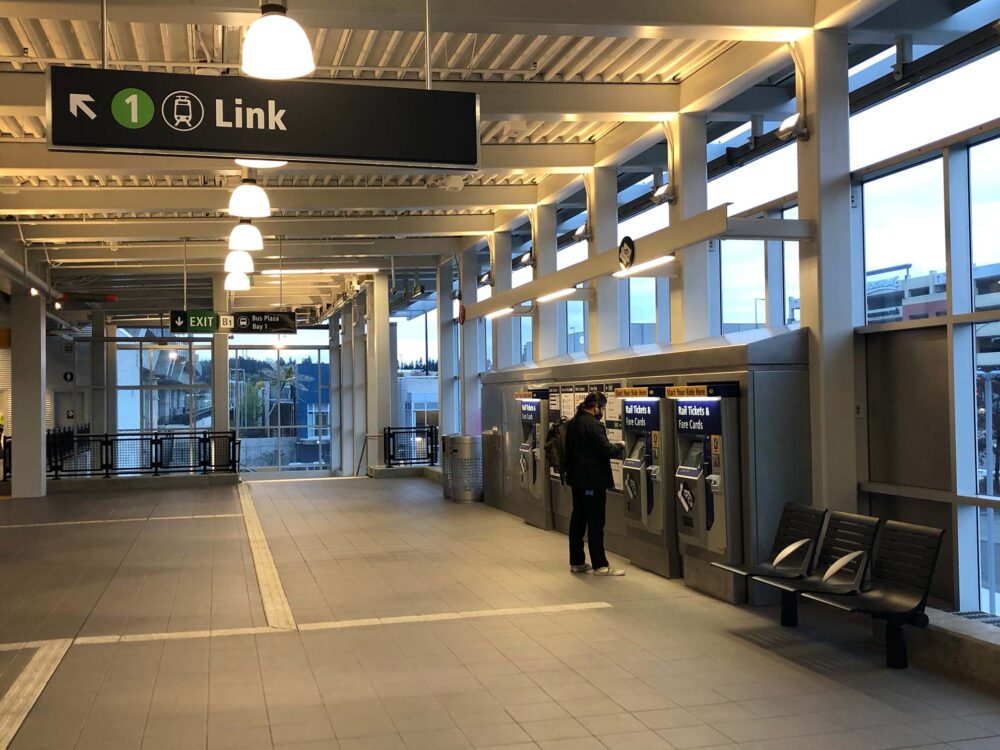 The new light rail connections remove many of the congestion issues that can arise on the Interstate. The light rail run from Northgate to the Westlake Mall in downtown Seattle takes only 14 minutes.

To use the buses and light rail, all you need is your pre-paid Orca card. Spain highlighted, “Your fare is good for 2 hours. So if you wanted, you could stop and do shopping or run errands along the way.” That also includes walking the short distance to the new Seattle Kraken facility at Northgate.

And just in time for the Seattle Kraken’s first season of National Hockey League (NHL) action to drop the puck later this month, the remodeled Seattle Monorail will resume service on October 9th to and from Westlake Mall and the Seattle Center. So, many hockey fans will not need to drive into downtown Seattle and can take the bus or park at the Northgate park ‘n ride or parking garage, ride the light rail to the Westlake station and easily transfer to the monorail at no extra cost.

Alan Hart, the principal for designer VIA Architecture for the refurbished monorail said, “Kraken hockey fans, and those attending concerts, will be able to catch light rail, and ascend shopping-center escalators to the monorail, which can carry 3,000 people per hour to Seattle Center.”

Sound Transit also has information about their bus route changes at https://www.soundtransit.org/system-expansion/lynnwood-link-extension and Community Transit also has complete information with their bus route and light rail connections at https://www.communitytransit.org/news/community-transit-news/2021/09/20/plan-your-trip-for-bus-to-light-rail-connections-at-northgate

Now for North Sound residents, there is a new more convenient, timely, and cost-effective way to commute to downtown Seattle or other destinations. As one rider toting a rolling suitcase at the Northgate station said, “It’s only about 50 minutes to SeaTac Airport.”