Harvesting mushrooms in the Pacific Northwest is more than a past-time for many. When I was a young girl, blessed with acres to roam against the backdrop
the Cascade foothills, we routinely left our crops to strike out into the untamed portions of our land to collect wild things; blackberries, salmon
berries, fiddleheads and huckleberries. But my favorite to forage for was mushrooms. Berries were tempting to pop into your mouth, and their ready
availability made the afternoon task just that; plucking and dropping them by colorful handfuls into my bucket with an ear turned out for bears, especially
so in the Spring.

But mushrooms those had to be hunted. It was a careful and deliberate perusal of the ground, the turning back of ground cover, the press of my
folding knife against a fleshy stem, and the careworn process of selection, preparation and consumption.

Foraging and gathering is rewarding, especially when there’s a payout at the end, be it cash or a good meal. In our corner of the country, there are a
multitude of fungi to choose from and for every species, there is at least a dozen mesh-bag-bearing, mosquito-repellent scented, mycologically-inclined
PNW native high-stepping through the brush to find it. I had no idea, when I struck out on the internet, that I’d stumble across a subculture of thousands,
dedicated in the pursuit of tasty edibles.

Diann Mize is the President of the Snohomish County Mycological Society (SCMS); she is wry and cheerful, and took my call without any hesitation. My first
question was, of course, how does one find themselves the president of a club dedicated to fungi? 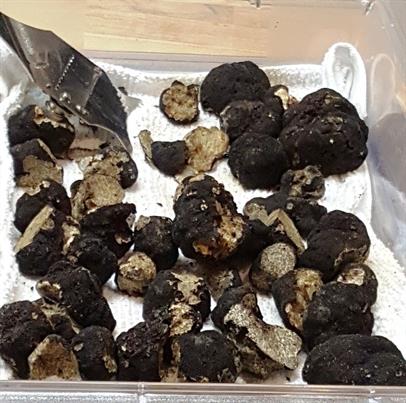 For Diann, it was a simple enough story that began in the seventies, when she and her husband spent time outdoors, then later struck out with five boys
in tow through Scouts, trips, and general types of activities that make children inclined to play in the mud.

“After the kids, we found we didn’t get outdoors as much. About six years ago, we decided to visit a SCMS show.” Together they decided it was a past time
they’d like to rekindle, and a few short years later, she was leading the pack. Diann goes on to explain that there’s an entire board, trustees, a
treasurer, and annual show that draws upwards of 500 people, and a teeming membership of 60-70 people. Not as big as the gargantuan Pacific Northwest
Mycological Society, but definitely large enough to represent a wide swatch of enthusiasts in SnoCO.

The annual show falls on October 14th this year, and will be held at the Floral Hall at Forest Park. You can expect to see and learn a lot,
observe up to 200 types of mushrooms. Just “don’t bother asking anyone where their favorite spots to hunt are,” she warns with a laugh. You’re just
as likely to get the same response from a pirate asking where the buried treasure is kept, which is something I remember clearly from childhood. My
dad was happy to share the bounty with neighbors, but was closed-mouthed when pressed for information.

The club meets every second Wednesday of each month at the Baker Community Center, with the exception of July, August and January, when the weather keeps
the growth of the mushrooms curtailed. Guest speakers of repute (this month to include award winning author and food-writer Eugenia Bone) appear routinely,
and the information is geared to be not only informative and useful, but engaging to everybody from children and novice hunters up through seasoned
hunters, who professional hunt and augment their incomes with their craft.

You’re welcome to join in. If you head out on your own, always nab up a field guide or an experienced friend. Never, ever eat a mushroom that you haven’t
positively identified or relied on an expert to identify, and feel free to begin your journey by reaching out to Diann at the club.