From inception to actualization, Paws With Cause is 100% rooted in community, care, and good works. Their germination and heart, as all the best stories
do, began with a dream, collaboration and more than a little grit.

Their model is centered around seniors painting adoptable rescue animals in shelters, with offshoots into other various venues. The leader of this particular
cause, Alix Frazier, shared that the idea was rooted in her own humble beginnings. The seed was planted during a challenging early childhood where
work on her family farm didn’t prepare her for early childhood education and she was “typed” into a role more than once throughout school. The desire
to reach others stayed the course through one of the most difficult times we face; the declining health of her parents.

“My mom and dad had Alzheimer’s, and I was always looking for engaging activities for them. I always found something, but it just never seemed like it
was ever enough. After they passed, I realized that I missed that engagement.” In the interest of self-care, Alix dipped a brush into the shimmery
promise of art. Less than a month into that endeavor, she was inspired by a crowd-funding program where two cats were pictured online, needing care.
As a gesture, she used her brand new brushes to paint the felines, and dropped her work off off, only to find out that had she done it just weeks sooner,
they could have been auctioned off for a substantial amount during a fundraising event. 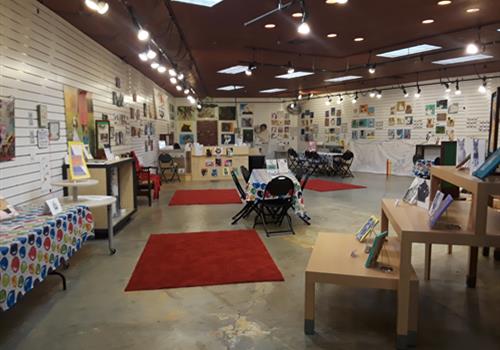 “I was floored, but it started something.” With inspiration and budding painting skills, she approached a colleague at a local retirement home, pitching
the core of the idea: getting seniors to paint adoptable shelter animals, but with dual intent: to engage creatively with an aging, generally isolated
population.

The combination allowed for care, art and interaction for the elderly, as well as added exposure for the adoptable animals and maybe just a little cash
for local shelters.

And so it came to pass, the altruistic fire caught. Alix began networking, reaching out to more and more organizations, shelters and varying venues to
find more types of people interested in painting with her, for a shared common good. She created pop-ups, was gifted/sponsored a brick and mortar location
inside of the Everett Mall, and added a Masters Painter group of volunteers.

These days, you can find Paws With Cause across from the Famous Footwear, but that’s not the only place to view the paintings they create. You can view
them at Collector’s Choice in Snohomish, Frontier Village Vet, University Heights Center, multiple shelters from SnoCo to Adams County, or local government
buildings, to name a small number of sites. It began with a call to a local Fred Meyer and the hopeful intention of being allowed to hang them in the
Freddy’s Starbucks, but when she showed up to mount them, was re-routed what initially seemed like a less than ideal locale: the hallway to the bathrooms.

“The store manager told me that on any day, three to five thousand people entered the store, and between 15-20% of them go use the restroom.” It’s basically
the only aisle in Fred Meyer that everybody will walk down, at least once. Humble, but solidly structured logic prevailed, and now you can find the
painting in six area Fred Meyers.

(Sidenote: While interviewing Alix and one of her volunteers, a woman wandered in, which Alix went to greet. “I’ve seen these at Fred Meyers,” was how she opened the conversation.

Every month, on the fourth Wednesday, they host an event within the mall, from 10:30-noon, which routinely hosts about fifty people; tables and chairs,
brushes and pre-sketched canvases tidily sprawl out of the front doors their community artist studio and into the foot traffic within the mall. 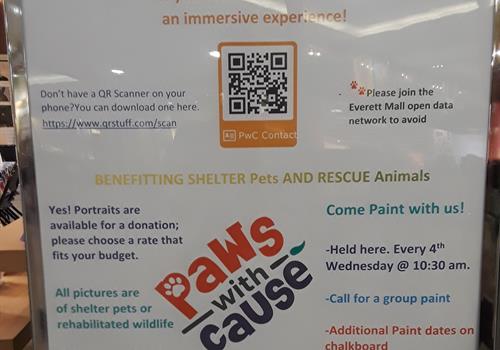 Alix’s most compelling comments aren’t about the logistical properties of running the newly-minted non-profit, they’re about the people that she’s
reaching. Engaging with at-risk youth and creating bonds, wading into memory care wards and being greeted with ease and smiles as she’s recognized
as a friend, even if her first name doesn’t readily come to mind. “My favorite part of all of this, is simply seeing them bloom.”

At the heart of the cause isn’t just adoptable furbabies and art, it’s about community and connection. The gallery isn’t just a communal hub, it is
your studio and workshop. It is your next shelter pet, your families inspiration and art spanning counties-wide, into
your homes and your hearts.

Learn more about Paws with Cause here: https://www.pawswithcause.org/