Prepare for the Everett Jets! Semi-Pro Soccer is Here in Everett

February 8th, 2020 was a great day for the city of Everett. Today, the emerging Everett Jets FC signed their very first player, none other that Everett Community College’s own boy wonder, Cameron Beardslee. 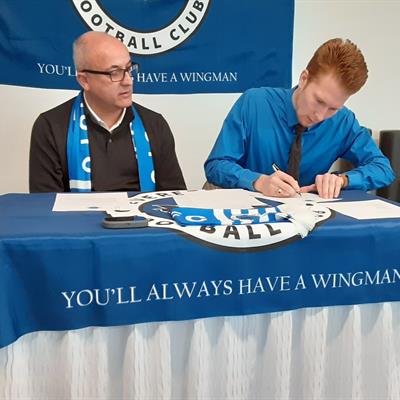 Marco Mummey and his brother Hawk have been considering starting a semi-pro team in Everett for a very long time. Now, as the U.S. seems to be gettingcaught up in the same kind of passion for soccer as the rest of the world, it seemed like a good time to formally take steps to plant that seed.

“We want to bring that experience to Everett,” Mummey shares. The closest local teams are in Redmond, Bellingham and Seattle and it’s their shared passionto bring it to Everett’s cityscape as well. “We’re here, right next door. Everett deserves that.”

“Everett has been hungry for this, for years,” shared Hawk.

Marco is a life-long resident of Snohomish County, and grew up playing soccer from the tender age of five. His family owns the Snohomish Soccer Dome, andhe’s a self-proclaimed soccer dome rat, always hanging around in his youth, when he wasn’t in school.

It’s been a long road so far, getting the team off the ground. They’ve joined the Evergreen Premier League of Washington, after going through a lengthyapplication process which began with a request for application, submittal of gobs of paperwork from budgetary planning and marketing all the way upto the nuts and bolts of securing players. “It’s a vetting process, too, so it’s known that not just anyone can just decide to start a semi-pro team.”

The team is currently powering up to start try outs, which are slotted for March 28-29th. Click here for the places and times and to pre-register, if you’re interested.

“The Evergreen Premier League is a league for developing young players, 18-22 on average, and a little younger if they’re very gifted.” It’ll allow forplayers in college to get a chance for more play, rather than 22 games a year, as it’s traditionally structured in SnoCo. “Around the world it’s 40+ per season. How can you be as good as someone who gets to double what your play is?”

Besides that, per Mummey, in soccer, the road to pro isn’t as clearly defined as it would be for other team sports. Locally, there’s just not much opportunity to develop more players. “There’s only one academy in the state, for the Sounders, which only allows 25 people. That’s only 25 chances.” This new teamwill not only allow for more chances, but the young players can up the number of their games to be more competitive with global standards.

The community feedback has been positive, and the local leagues are excited enough that they’ve had more than one offer to join others, as well as individual players reaching out for feedback on when the try outs will become available.

Sponsors are hopping on board, which is always a promising indicator of enthusiasm, with PNW Physical Therapy doubling down and offering donations and to be the go-to rehabber for the team.

Pre-season runs through the end of April, regular season May-July, with a two week playoff period at the end of July.

Everett, prepare for the Jets! You can support the team by ordering merchandise or reserving tickets for the 2020 season. Start by checking them out on
Facebook or their website, here.