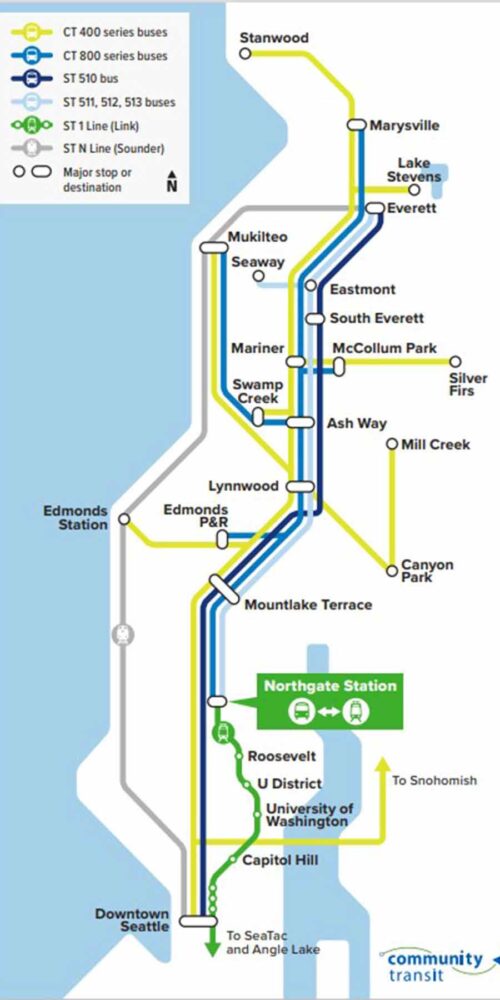 The general hope is to lessen the travel time for many commuters during peak traffic hours. “Whether riders are going to class at the UW, a job downtown, or to SeaTac Airport, the combination bus-light rail trip provides frequent, easy connections that, in many cases, will decrease overall travel time,” according to the release.

Community Transit CEO, Ric Ilgenfritz is excited about the upgrades. “This connection is a game-changer for people in Snohomish County as it expands all-day, frequent transit options between the two counties,” said Ilgenfritz.  “Having an easy connection to the regional light rail network increases the possibilities for using transit to get to where people want to live, work, or go to school.”

With the new connection to the light rial this fall, specific bus route times are scheduled to be more reliable. Community Transit is redirecting the 800-series bus routes to the 1 Line at Northgate Station instead of going to the U District and the University of Washington. Additionally, Sound Transit Routes 511, 512, and 513 that run between Snohomish County and Seattle will also connect to light rail at Northgate.

The release explains that the Northgate-UW portion of its bus routes, Community Transit will reinvest those service hours by adding 48 trips back to Snohomish County in the afternoon and evening. Because of this, each of the 800-series routes will have a bus leaving Northgate every 15 minutes during the evening commute.

People leaving the 1 Line from Snohomish County will now have direct transit connections to many new locations for the first time. Other than Northgate, riders will be able to go anywhere light rail travels. The destinations include Seattle’s Capitol Hill neighborhood, Rainier Beach, Tukwila, and SeaTac Airport. Riders will also be able to catch a bus connection to South Lake Union or First Hill from Northgate, bypassing a trip downtown. Those of you who commute using the Community Transit 400-series routes and Sound Transit Route 510 will be able to continue to provide direct bus service between Snohomish County and downtown Seattle.

Over the following two months, Community Transit staff and Sound Transit will be at transit stops, speaking with community groups, and hosting virtual meetings to help customers map out their bus-light rail trips. You can follow Community Transit on Facebook or Twitter @MyCommTrans to gt updates on outreach events.

Amtrak Returning To Two Daily Round Trips to Vancouver, B.C.