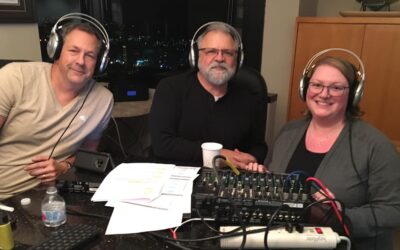 Today, the Snohomish County DUI Victims Memorial wall was unveiled and re-dedicated to honor the late Mark Brinkman of the Lynwood Police Department (LPD) who sadly unexpectedly passed away in early April of this year. Around 200 people came together to honor and remember the lives taken by drunk drivers. Additional chairs were brought in to accommodate the crowd.

The ceremony was kicked off by Jan Schemenauer, the former Snohomish County DUI Victim panel coordinator who welcomed the crowd and gave a brief history of the memorial wall.

Following the dedication, Scemenauer, and Caprice DeGuzman read aloud the complete list of names on the wall to re-dedicate the wall. Smiles, hugs, tears, and silence pierced the crowd as each name was read aloud.

Brinkman was a 35-year law enforcement veteran with a 25-year career with the Lynwood Police department. He was hired by the LPD in 1996, “… he established himself as an excellent police officer and leader,” said Lynwood Police Department Chief of Police, Jim Nelson in a Facebook post. “He was especially passionate about traffic safety where he became a fixture in the region, serving as a Law Enforcement Liaison to the Target Zero program and was widely recognized for his specialized work as a Drug Recognition Expert and trainer.” Chief Nelson announced during the dedication that during a 7-year stretch, Brinkman arrested over 1,300 DUI offenders. 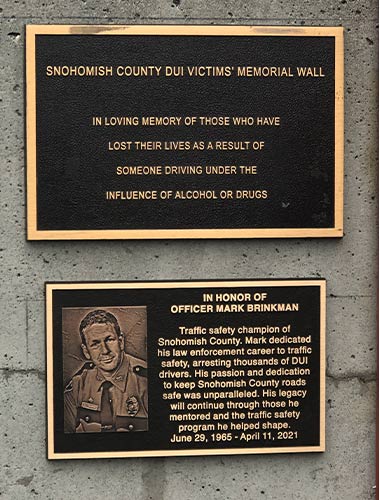 Lynwood City Council President George Hurst shared with the Lynwood Times, “The Lynnwood community has lost a great Police Officer and leader with the passing of Mark Brinkman. His expertise in DUI recognition and his calm demeanor in responding to calls made Lynnwood a safer place.  Mark was an imposing presence on the streets, and it reflected the compassion he had for his fellow officers and for the residents of Lynnwood.  We are all better for having had Mark be part of the Lynnwood Police Department.”

Officer Brinkman was no stranger to the crew here at KRKO. Beginning in 2009, Brinkman would come to the station during the holiday season and host his annual DUI Awareness Show. During this show, “Maury The Movie Guy” would attempt to live stream the radio show while getting drunk on-air to show the effect alcohol can have on the human body. The event was sponsored by a grant from Snohomish County DUI & Target Zero Task Force.

Between songs during the two-hour show, Brinkman would give Maury a sobriety test and explain to listeners what happens when you get pulled over for a suspected DUI. People in the radio booth consisted of prosecutors, attorneys, police officers, and insurance agents.

Brinkman would also come to the station around the 4th of July to remind people that DUI’s don’t only occur during the holiday season. He was a lover of 80’s music, hockey games, and protecting the Lynwood community.

His service is and will forever be missed. He is survived by his wife Leslie and their three adult children.