STITCH MITCHELL – KXA RADIO HOST, OH THE THINGS YOU DO NOT KNOW!

Like the featured photograph?  Limo with ladies?  This was Las Vegas in the 80’s.

You know his familiar voice in the mornings on your favorite country music station KXA Everett.  Let us add some more personal insight into the person.

Stitch was born in Marengo, Iowa, (County Seat), but grew up in Williamsburg, Iowa (he says they call it billstown).  He was the 6th of 7 children, four boys and three girls.  Five of the seven are Leos.  Stitch says, “do the math, apparently my parents enjoyed the holidays!”  Can you even imagine this rambunctious house?  His mother is obviously a saint and his father must ask himself what have I done?

The first born were sons, followed by three girls, then Stitch and his younger brother.  Figuring the girls were tired of being teased by their older brothers, no wonder what happened to Stitch!  Did the sisters put hair curlers into those golden locks?  Dress him and his baby brother up?  Just asking. 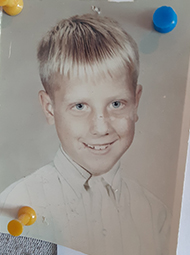 Raised in a small community, they pretty much had free rein, and spent a lot of time on an acre and a half sandlot.  With so many siblings to bring along, plus the neighborhood crowd, one can only assume they fielded big teams.  They played baseball and whatever other games they could invent or come up with in “mesquite stadium”, affectionately named as an homage to the mosquitoes that dominate hot summer days in Iowa.   Only rule being, your scraped knees, bruises, and bug bites had to be home by dinner.

On Sunday mornings however, Stitch became an angelic altar boy.  Luckily, his robe hid his band-aids.  Wouldn’t it have been fun to hear his confessions?

And you’ll have to ask him about “riding the rails”….where they actually drove cars on railroad tracks…sometimes bumper to bumper at night…over trestles etc…only 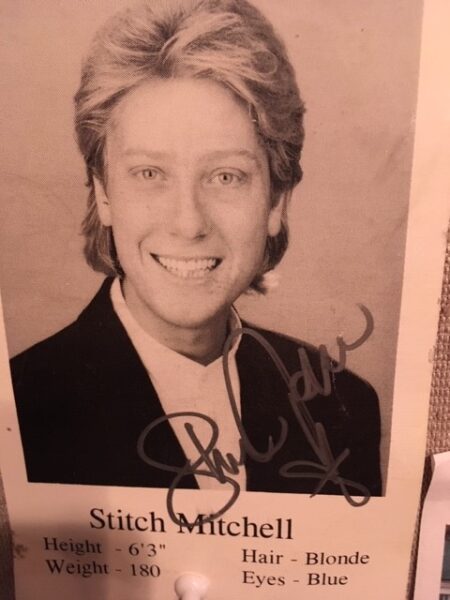 Stitch and his friends would be crazy enough to do that! In fact, Stitch and his youngest brother Snitch have actually written a movie script entitled “Derailed”, about those insane and crazy Iowa days in the mid to late 70’s. If you know the actor Ashton Kutcher….who grew up 15 miles away…tell him to get in touch with Stitch so he can produce the movie.

His love of radio, TV, music, and all things related began early.  He was involved with theater in high school and college, appearing as an actor in “The Fantastics”, “The Emperor Has New Clothes”, 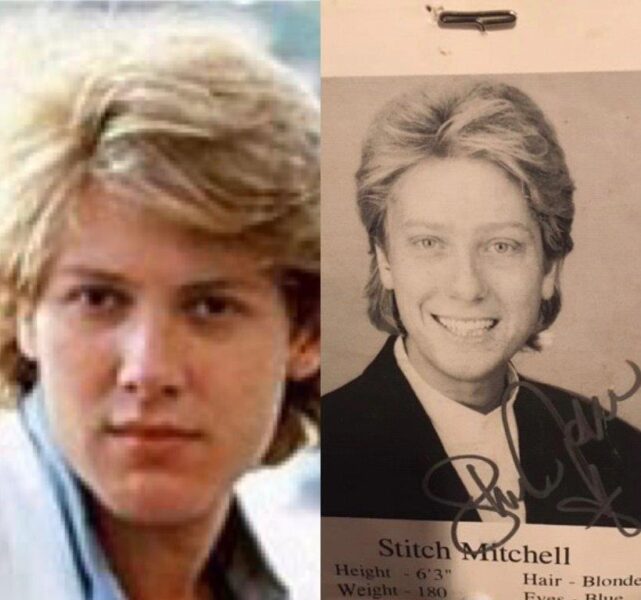 and the “Diary of Anne Frank”. He was told often how much he and James Spader looked alike.  Of course, Stitch says Spader looks like him.  We think Stitch is more handsome and doesn’t have chubby cheeks. You decide.

And here is a picture of Stitch and Marty Stewart.  Stitch is very interested in knowing from you, his listeners, who you think had the best mullet.

His first job was at an 18-wheeler truck stop!  Stitch would soon leave that behind, and move on to host radio shows in Iowa, varying from Jazz to Rock.  From there he headed to Las Vegas with KMCQ (opening photo).  Then he was off to Portland and finally home to us in Everett where his love of country music and roots belong.

When not on-air, Stich’s favorite memories are of big family BBQ’s, and that has not changed.  He still gathers with family for reunions and good old BBQ… and a Tiki Bar, as often as possible.

He is still into sports of all kinds, especially golf.  He practices the same vocal exercises with his wonderful voice every morning to warm up for all of you.

Stitch is a huge reader, and his favorite author is John Steinbeck.  He belongs to a book club.  All his fellow members are female. NO COMMENT. (see opening photo)

His favorite food is fried chicken.  Whose isn’t if they are being honest.

He thoroughly enjoys being able to interact with and meet his listeners.  Hopefully, that will begin to happen in person again soon.

You can listen to Stitch Mitchell live weekdays on Classic Country KXA at 1520 AM or 101.1 FM from 6:00 AM until 9:00 AM, or anytime by streaming at KXA Live Stream or downloading the KXA Mobile App.

As summer ends and the school year begins, the... Read More.
Previous Next