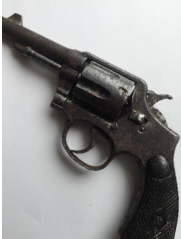 On Friday afternoon Debbie Copple, Director of the Sky Valley Chamber of Commerce & Visitor Information Center in the historic logging/mining town
of Sultan, received news that has the community all abuzz. The .38 Revolver, long held to be the weapon used in the 1927 bank robbery and shoot out
that left local lawman Percy Z. Brewster dead, has been found and returned.

Rusty, but intact and now home, the relic .38 pistol was stolen last year after a Thanksgiving weekend break in, from where it had been on permanent display
at the active Sultan Visitor’s Center.

The weapon, whose firing pin had been long removed, was returned to Copple and the community by a city worker who has requested to remain anonymous. Little
is known about the journey of the gun this past year except that the gun was found in a wooded area near Sultan after being abandoned. The gun was
the only item stolen during the break in last Thanksgiving. Copple says she felt the gun theft was disheartening and a “slap in the face of history”.

It is local lore that the gun was the weapon used to kill Marshal Percy Z. Brewster after the robbery of Citizens State Bank in 1927, on the same street
that today houses the Sky Valley Chamber of Commerce and Visitors Information Center.

Citizens State Bank was Sultan’s very first bank. Rumored to be one of the only banks in Washington State that did not foreclose on its customers during
the great depression, it was robbed in 1927.

Shortly after the robbery, during a “movie style gun showdown” on Main Street in Sultan, Marshal Percy Z. Brewster was shot and killed by 24-year-old robbery
suspect Edward Sickles. Marshal Brewster, after having confiscated the suspect’s long rifles, had neglected to apprehend the handgun that would be
used against him. Marshal Brewster was shot once in the left lung and died several hours after.

Sickles was later taken in to custody, sentenced to hang, escaped, and ultimately was hunted and killed in another gun battle with local deputy sheriffs.

Copple says the gun has gotten a lot of attention but is only part of the story and that what is most valuable was Marshal Percy’s contribution to the
area. She goes on to share that the gun will be put back on display in the Visitors Center, but with better signage to deter would be burglars, making
it clear that it is no longer functional.

Ole and Marlene Carlson were visibly moved when they learned about the guns’ return. Marlene Carlson, born and raised in area logging camps said, “It felt
like somebody was thumbing their nose at our history.”Asked if she could forgive the burglar who stole the piece of Sultan history, Carlson says “Forgive
’em? We don’t know if we’re ready for that, we’re just glad we got it back!”

This article was contributed by Colette Keith. Click here to contribute your own article.

Body Of Everett Kayaker Found By The US Coast Guard

Teen Missing in Lynnwood Since February 5