The first thing Ellie did was show me her room.

It should have been what I expected for a 13-year-old girl, but then again–it wasn’t.

I was there to talk to Ellie Musgrave about how she’s one of the top racers in karting–how she dominates her field at 13 years old, and even puts the
grown men to shame when she gets behind the wheel. I was there to ask her about her plans for Nascar and the passion she has for speed.

So when I stepped into her room and saw pink, pink, and more pink–I had to smile.

Ellie is your typical, adorable 13-year old. She smiles as she talks, she’s shy, and she tends to blush when she has to talk about herself. When you first
meet her, you would assume she’d share the activities of the usual teenager as well. But then you turn, you face her dresser, and you see the mountain
of gold. All of her racing medals, awards, plaques, and achievements.

“I started racing when I was five,” Ellie explained. “It all started when we visited the quarter midget track in Monroe and I was just hooked ever since
that.” 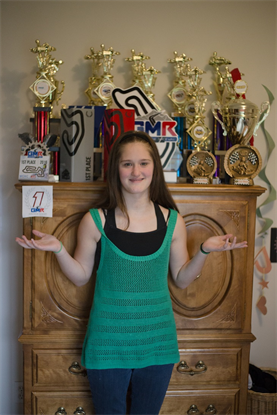 Ellie’s father, Tim Musgrave, is her biggest fan. Acting as her manager of sorts, he has a background in autocross and has always loved anything with a
motor. He repairs her carts, helps Ellie train, and sits in every stand that she races in.

“Ellie has always been crazy about driving. Even before five years old, she had a Dora the Explorer quad that she’d roll around in and she was absolutely
in love.”

The awards, Ellie explains modestly, are fun reminders of the competitive part of racing that she thoroughly enjoys and the reason she’s risen to the top
super fast.

She finished 2nd in one race at the Canadian American Karting Challenge when she was only 12–in a 13 to 16-year-old class–and 5th overall in 2016. And
one by one before and after that she runs her hands over medals that boast of first place, second place….I don’t even think I saw anything less than
2nd place. It seems she’s always at the top of her game.

Ellie’s wall is littered with photos of when she first started racing. She said pink is her favorite color so now she’s branded with pink carts and a pink
helmet and even the racing name “Pink E”.

“They called her Bobble Head when she first started racing,” Tim said. “Her helmet was so big on her little body. But boy, could she drive like she was
so much older.” 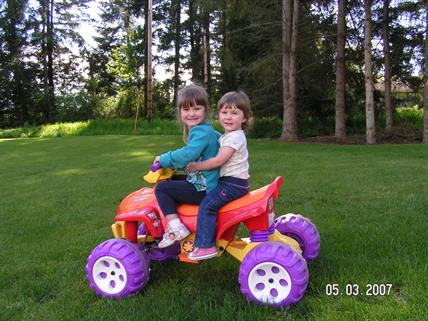 Ellie has already done six to seven states worth of traveling and next week she is heading to North Carolina to practice in front of Nascar and get the
exposure she’s going to need in order to reach her goals. She has raced in a Tony Kart and a CRG for the past years, but her biggest goal is to get
into a car and enter the big leagues.

How will she get there?

“A lot of practice!” she says with a smile. She said that she attaches a Go Pro camera to the front of her cart and after each race and each practice session
she studies every

detail of the race and makes adjustments based on what she did right and what she could have done better.

“I always try to get better and learn from all my mistakes,” she said.

“Sometimes it’s hard to make friends,” she said, “But I don’t really think about being a girl with a bunch of boys around because I’m just thinking about
driving.” 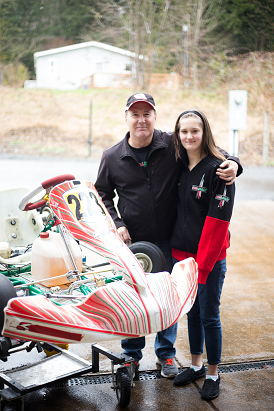 Tim agreed, adding that he has always told her that she’s equal to everyone else on that track, and when the helmet goes on and the engines start, she
isn’t a 13 year old girl–she’s a driver.

Ellie’s goals and ambitions don’t just include Nascar and being the best at what she does–but always figuring out ways to be better and step up her game.
She said that when she’s on the track she’s always thinking one step ahead.

She is driven, passionate, and full of life–yet the thing that makes Ellie stand out, perhaps, is the way that she rises to the top without having to
brag of her success. Medals upon medals, and still she manages to keep her feet planted.

“She’s amazing on that track, –yet, most of the kids at her school don’t even know she races,” Tim told me with a laugh.

“I don’t like to brag about things,” Ellie said, pink helmet under an arm. “Racing is a part of me. But being that way isn’t.”

Ellie will be striving to reach National, Regional, and Global levels with her racing and spends much of her time practicing in Sumas, WA under the wing
of Michael Vaioliante of ItalKart–who is driven to watch her succeed as well.

It’s no doubt that we’ll be seeing Ellie lap the track time and time again with “first place” status as she reaches her goals in the coming years.

Keep your eyes open for her–she’s the one in the pink. 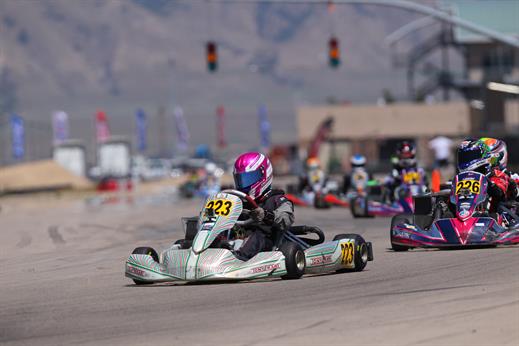