The right man for the right mission: Everett man earns Caregiver of the Year award

It’s probably no coincidence that Goodwill is his last name.

Goodwill is an attribute among patience, kindness, and a rare concern for others that seems to be the reason Right at Home caregiver Phil Goodwill stands
as the one man in all of the West Region (WA, ID, OR, CA, NV, NM, and WY) who now holds the award of Caregiver of the Year.

Right at Home was founded in 1995 and is an organization that offers in-home companionship and personal care and assistance to seniors and disabled adults
who want to continue to live independently. This encompasses adults from 18 to 105–and even end of life care.

It isn’t an easy task to take on by any stretch of the imagination–but it’s what Goodwill says he was born to do. As a Right at Home Caregiver for four
years now, Goodwill has worked with a variety of people but he tends to have a knack for senior veterans and those suffering with dementia and chronic
illness.

“There’s an ebb and flow with PTSD and dementia alike,” Goodwill said. “You learn to not take anything personally. And there’s never room for judgment
because you can’t correct someone who has been through various battles.”

Goodwill said although he isn’t a veteran himself, military service runs through his family. Both of his brothers, various uncles, and his Grandfather
all served. So it’s dear to his heart.

“I don’t have clients–I have people,” Goodwill said. “The people I care for are husbands, moms, dads, sisters. I’m there to make them as comfortable as
possible.”

Right at Home currently has over 18 thousand caregivers throughout the country, and when it comes to nominating Caregivers of the Year, it can be a daunting
and tedious task. But according to Victoria Johnston, owner of the Everett,WA Right at Home franchise, Goodwill was an easy choice.

Johnston said of Goodwill, “Phil emulates what the Right at Home culture wants to reflect. He’s the right person with the right approach and the right
service with a strong heart for the right mission.” 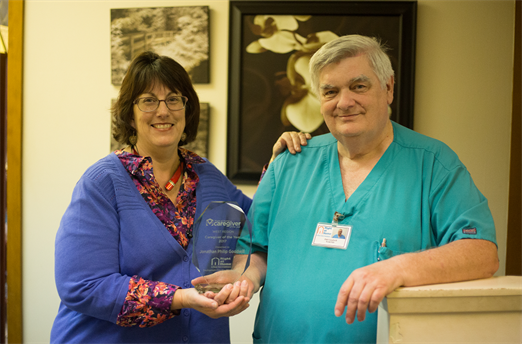 Goodwill has stories upon stories, often getting choked up while talking about the people he has cared for, loved, and have said goodbye to during his
years of service. Some of the stories are nerve-rattling, others are heart-warming. And some define who Goodwill is.

“I love my people. There have been times, after I clock out, that I go to their sides and say, ‘It’s ok. You can go home now’.”

One patient in particular will always stick out to him. His name was Jerry. Jerry was on hospice, and for about a week he had people coming and going from
his home to say goodbye.

Although Jerry was positive and hopeful, he continued to get worse and worse. One night, when the house was empty, Goodwill said he sat by Jerry and softly
said, “You’ve been saying goodbye all week, Jerry. Now it’s about time to get ready to close your eyes and say a hello.”

Jerry died the next day. He was found beside his bed with his hands folded–praying.

The story gets Goodwill teary to this day, but reminds him why he does what he does.

Kate Turner, the Right at Home Franchise Business Solutions Programs Manager said that they take the Caregiver of the Year award seriously, sifting through
stacks of applications each year. But Goodwill stood out to her and her team.

“We noticed that Phil has a niche with veterans and that’s such a hard niche to fill,” Turner said. “He actively demonstrates passion about his service,
has teamwork, and has an impact on the clients he serves.”

It certainly proves to be true. Through tears, laughter, long hours, and more friendships
to speak of then most of us have the honor of having, Goodwill intends on continuing to be a caregiver for many more years to come.

For details or information about Right at Home, visit https://www.rightathome.net/