This is Jet City: Ocean Exploration

JFK’s New Frontier may have been flight, and it’s thrilling to know we’re underway with the process of toeing the soil on Mars, but Boeing, known worldwide
as a massive aerospace hitter, plays a role in something you might not yet have considered: ocean exploration. Boeing has been in the business of crafting
manned and unmanned deep sea systems since as early as the 1960s.

While automation in the workplace has its supporters and naysayers, pretty much everybody agrees that when it comes to dunking your co-workers down
to the ocean trenches with air and power coming through lines to a surface support ship, it’s wisest and kindest to develop unmanned submersibles
that do what we can’t.

The newest family member to join the unmanned undersea vehicles (UUV) is the Echo Voyager, which, like any emerging technology, stands on the shoulders
of its predecessors. In this case, the Echo Seeker and Echo Ranger, which are 32-feet and 18 feet, respectively. The Voyager is a whopping 51 feet
from bow to stern, can operate autonomously for up to six months at a time, and can travel 7,500 nautical miles in one go. A nautical mile equals
just over 1.15 of a land mile (as the crow flies), which equates to 8574 miles or 13,800 kilometers. 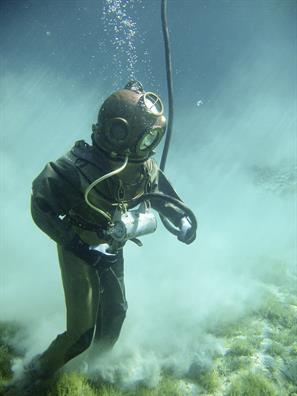 According to the National Oceanic and Atmospheric Administration, only about 5% of the ocean has been explored, which leaves a number of untold mysteries
hunkering out there in the deep blue. Ocean exploration is important because we’re curious by nature, but also because, as this technology becomes
more available, we can begin the process of militarizing the depths, patrolling waterways and harbors that contain the arterial blood of our capitalistic
bent towards import and export. Anything that can be done to ensure a safer future is better for humankind as a whole.

This concludes the mini-series on Boeing, selected in part to detail empirically that Boeing doesn’t just extend to every corner of the globe, but
that their work lands on dimensions commonly unassociated with the behemoth. It’s easy to forget, as you buckle in at Sea-Tac or cruise past Paine
field on your commute, that they’re not just a manufacturer of commercial enterprises. The Boeing as we know it to be shaped the history of the
Pacific northwest, from the machine press operator out in Arlington who specializes in a single part, dresses in coveralls and protective eye gear,
or an engineer who shoulders through heavy traffic door-to-door with you. Boeing is more than buildings and aircraft, individuals or parent companies.

Boeing laid roots in Everett, beginning with a ramshackle autogarage down on Pacific in downtown Everett and growing – sometimes shrinking and diversifying-
in order to become what it is today. Space suits, defense missiles, machine shop workers, blue collar workers and white collar execs, unmanned
undersea vehicles, are the façade of a massive organism, whose tap root delves deep into our soil.

We hope you continue along with us, as we continue to explore the local, global, soon-to-be-interstellar impacts of Jet City, and those companies and
individuals who have contributed to our ethnographic identity as we know it to be today.

This is Jet City: Elpis and Wood

Jet City: A well-deserved nickname for a city that takes to the skies