What an appropriate photo for this time of year.

Tim Hunter was born in comedy.  On the way to the hospital his father got lost, so he was born in Gardena, CA, not Torrance, CA, where he would grow up beginning a few days later.  He has fond memories of a great family life.

One of his best memories of growing up in his neighborhood was playing “tennis ball baseball with garage doors as backstops, tennis balls and bats.  Over the years, Tim found himself more into basketball, playing for the Torrance High School Tartars, as well as being Senior Class President.   Torrance High was the school Louis Zamperini attended (you’ll see it in the beginning of the movie, “Unbroken”) and remember that they were known as the Tartars. It will come up again later in his story.

While running for President, Tim’s speech was a series of one-liners.  He won in a landslide, and thus the saga starts.  He and some friends decided they wanted their own radio station.  With a serious lack of funds and no FCC radio license, they convinced the school to allow them to use the PA system that went all over campus.  The end result was a couple of class clowns, their schtick and some music. It only lasted four days due to complaints from neighbors (and probably some teachers).

But…the on-air host was born.  He would end up at the UW, not really knowing what to major in.  He discovered they had a broadcast curriculum and a radio station.  After an assigned TV project that turned into a disaster, Tim realized if he focused on radio, it would give him full control of the end result.

Tim first went on-air at KCMU, the UW radio station and gained an internship at KING. He dug into all opportunities and would land his first paid radio job, in Yakima, for $350 a month. If he “worked out”, three months later that would be bumped to $400. He laughs that his rent was $175.  Lots of ramen noodles and mac and cheese.

Fast forward, you all know him from his 19 years as part of the Murdock and Hunter morning show on KLSY.  At this point  the antics really took off, including Tim and his partner Bruce Murdock jumping into a vat of Tartar Sauce.  Whenever the men or women lost their famous “Battle of the Sexes”, the losing gender had to face “hideous consequences.” Another consequence was Tim having to dress up like a turkey. After having his legs shaved, of course.

One of the perks of his career has been to meet a lot of interesting people.  Pictured at left, is Tim with his “hero” Steve Allen.  Let’s add Steve Raible, Pat Sajak and Vanna White, to name just a few.  Of course, we couldn’t resist adding the “don’t ask” picture,  Fairly obvious which one this is. 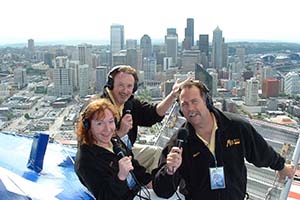 Tim and his co-hosts were brave enough to stand on top of the Space Needle for pictures.  Perhaps he went inside afterwards to get some pizza, his favorite food.  His friend Richard Simmons encouraged him to work out, get “buns of steel”, and “feel the burn”. He tries to eat well.  But do not mess with his cheese.

He is a Mel Brooks and comedy movie fan. Favorites?  Blazing Saddles, Young Frankenstein, and all the Naked Guns.

Tim loves travel and fishing, but is not a big fan of reading books.  He says, “why would I read when I can write”.  His writing is what keeps you laughing all morning, from someone who loves to make you smile. Tim was a monologue writer for Jay Leno and the “Tonight Show” for 10 years and still has various comedy clients, including a comic strip, a political cartoonist and a ventriloquist.

Radio has become more “corporate”, so Tim loves spending time now with a true local radio station that still allows fun, promotions, and encounters with his listeners.  We at KRKO are delighted to call him one of our own.

You can hear Tim Hunter on air at KRKO at 1380 AM or 95.3 FM on your dial, weekday mornings between 6:00 and 9:00 am. You can stream anytime or anywhere with the KRKO app available at KRKO Mobile App.  His blogs are available at Everett Post Podcasts.

Not enough?  Check out his WackyWeek website. He also produced his 6th annual April Fool’s Day newscast, which you can catch at nationalgullibleday.org.