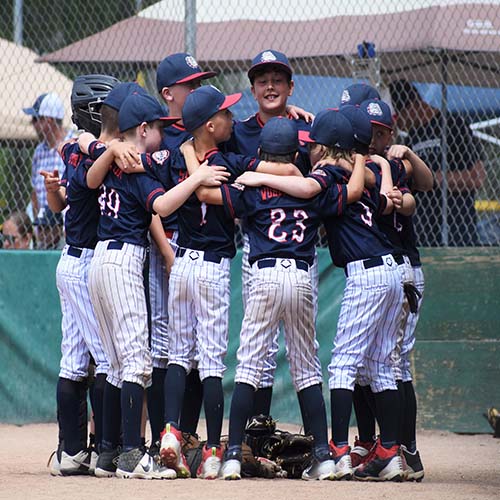 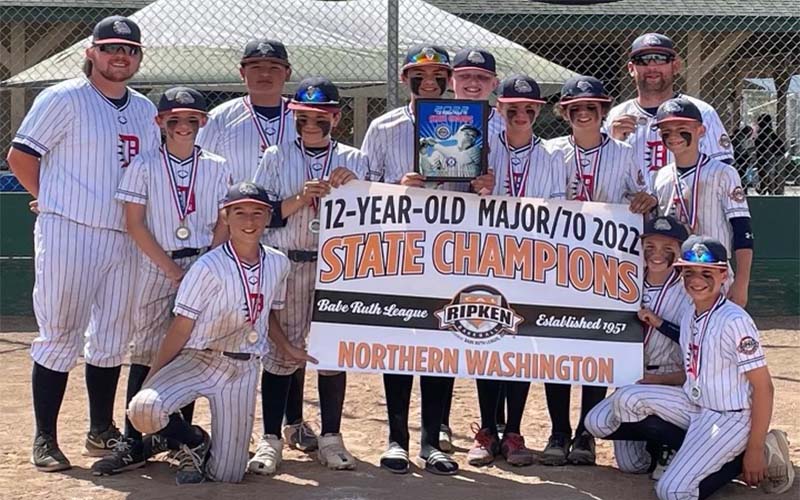 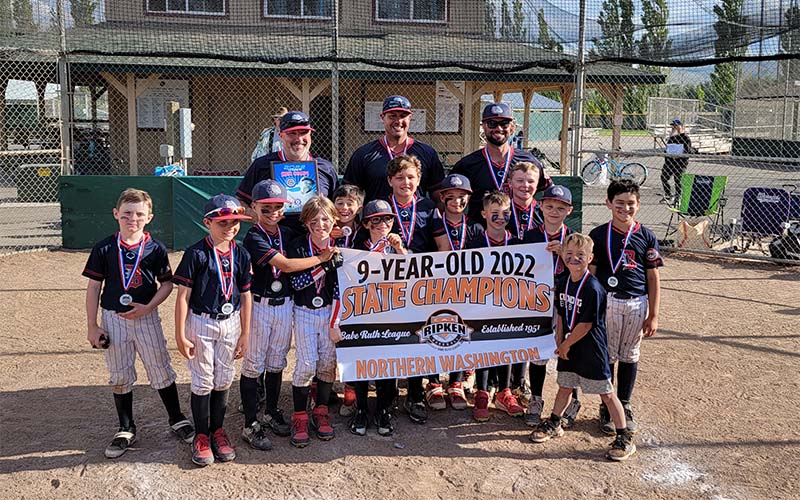 On July 9, two youth baseball teams representing Mount Vernon took home the 2022 Northern Washington Cal Ripken State Tournament titles in Ellensburg, Washington. As a result, the 9u and 12u Mount Vernon-Conway Diamond Dog tournament teams both earned sports in this week’s Pacific Northwest Regional Tournament in Meridian, Idaho where they will compete for regional titles.

This is the first time these two teams will be attending the regional tournament, and based on their state tournament run, expectations are high for the young players. “We are so excited to see our teams compete and represent Skagit Valley,” said Flora Lucatero, President of the Mount Vernon-Conway Youth Baseball League. “We couldn’t be prouder, every player came to compete whether they were on the State title teams or our other 10u and 11u teams. We have every confidence that our boys will show up and play hard.”

The State tournament consisted of a pool play and seeded play, with all teams coming in at an equal playing field. Each team was moved into their age groups, where they competed in pool play games and eventually bracketed seeded games to determine the champions. Any team from the Cal Ripken or Babe Ruth chartered league can qualify for the State tournament, regardless of their season record.

The 9u Diamond Dogs went 5-0 during the State tournament, outscoring their opponents 57-5 over the course of three days. These included a 12-4 win over Port Angeles, 11-0 win over Eastmont, and a 13-0 win over Moses Lake, giving them a berth in the Semi-final game that they won 10-0 against the home team, Ellensburg. The 9u Diamond Dogs went on to dominate Wenatchee, winning 11-1 despite facing 24 mph steady winds during the State title game.

For many players on the 9u team, it is their first year playing kid pitch baseball due to the COVID-19 pandemic. However, the year away from baseball hasn’t stopped the players, coaches, and staff from working hard to get their teams prepared for the season and tournaments. “Our goal for our program is to prepare our teams with the basic fundamentals of baseball, and the boys have done an amazing job doing what needs to be done and getting to that next step,” said Lucatero.

The 12u team also went 5-0 during the State tournament outsourcing their opponents 48-8. The boys beat Wenachee in the championship game 2-0 with a two-run walk-off homerun by Aiden LeFave in the bottom of the 6th inning to secure the win. LeFave also pitched a complete game shutout backed by great defense from the team. “Finishing the tournament with that hit was one of those moments you’ll never forget,” added LeFave, talking about his two-run walk off to help his team win the State title. “My dad used to always say, ‘whether you think you can or you can’t, you’re right.’ I always keep that in the back of my mind when I take the field.”

“Our team played almost flawless defense throughout the State tournament,” said Tim Woodmansee, head coach for the 12u Diamond Dogs tournament team. “Each team member contributed to the state Championship title.” Winning isn’t the only point of emphasis for the teams, having fun with their friends and experiencing this moment have been a leading factor for the teams success. “They just want to have fun, at this age it’s all about having fun right now,” added Lucatero. “Their mindset isn’t as focused as an older group of players, which is fine because we fully believe our teams have what it takes to compete and win in regionals.” The support from parents is also a driving factor for these two teams, with them being the players biggest fans.

Both the 9u and 12u Diamond Dog teams will move on to the Pacific Northwest Regional Tournament in Meridian, Idaho from July 21-23. Rounding out the Pacific NW Region at the tournament will be teams from Alberta, British Columbia, Idaho, Montana, North Oregon, South Oregon, South Washington, and Wyoming. The winner of the 12u bracket at Regionals will advance to the 2022 World Series in Branson, Missouri on August 4-13. The winner of the 9u bracket will receive an automatic berth to the 2023 World Series as 10-year-olds. All Diamond Dog games at Regionals will be displayed on the GameChanger app in real-time for family, friends, and supporters who want to stay on top of the action.