According to the National Retail Federation, a decade ago just about 60% of adults planned on celebrating Valentine’s Day with a romantic partner. By 2019, that number dropped by half. That being said, spending for Valentine’s Day is actually on the rise, expected to cap $27.4b this year.

A 2017 flash study by NRF “found the top reasons consumers chose not to celebrate Valentine’s Day were that they considered it to be over-commercialized, didn’t have anybody to spend it with or simply weren’t interested in it anymore.” So, how do the facts bear up? Why are consumers reporting lowered participation for the saccharine holiday while spending is on the rise?

It is because people are not just buying for their sweethearts anymore. They’re buying for themselves, for their single friends or work colleagues … and their pets. The largest portion of that $27b is still going to spouses, but the number of people who purchase gifts for their pets
has doubled since 2009. For those polled in 2019, 27% of consumers said they would get gifts for their pets, which is the highest reported number
in the history of the NRF poll. 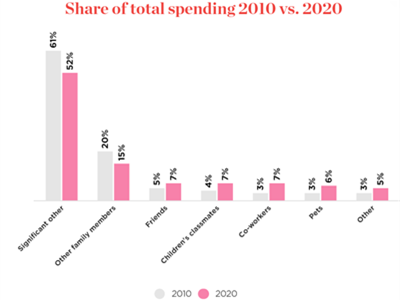 Retailers and online retailers are definitely aware of the trend and are offering up a smorgasbord of options; heart shaped plushes and tags or pet
friendly cookies and gift boxes. Want to go big or go home? Amazon.com, Chewy.com and rover.com all have dedicated branch URLs for gift giving
to your dog.

Want to take your dog out for a night on the town? Toggles Bottle Shop or the Independent Beer Bar on Hewitt is dog-friendly as well as Crucible Brewing
on Everett Mall Way or Soundbite Cider in the same lot all allow for dogs, to name a few. If beer isn’t your thing, throw your PNW-style-puffy-parka on your dog or cat and head to a local pet retail establishment to let them pick out some coordinated pants for that parka or just re-up on their
favorite chew toy.

Know of anywhere else to celebrate with your pet? Have a great recipe for homemade cat or dog food for a fun night in? Leave it in the comments.

The Washington State Department of Commerce Broadband Office has... Read More.
Previous Next