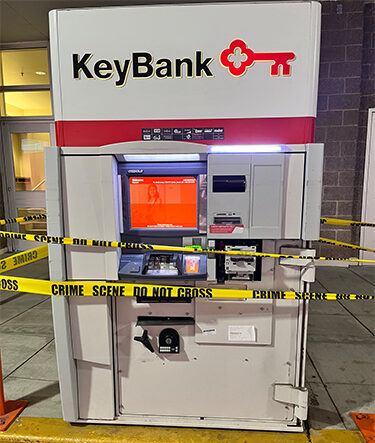 On Friday, Dec. 10, at 6:33 am, a driver in a large pickup truck approached the Key Bank ATM at Key Bank Tower in North Everett. However, unlike most bank goers, this person attempted to withdraw a little more than usual.

The driver, wearing a neon-colored sweatshirt, hopped out of the vehicle and wrapped chains around the ATM before getting back in and hitting the gas pedal. To his dismay, the bed of the pickup truck was hoisted in the air and stopped him dead in his tracks.  The front panel of the ATM flew off the machine and found a resting place behind the right rear tire of the vehicle.

Soon after, the suspect put the vehicle in reverse and realigned the truck for another go, but this time, they reattached the chain to get a better grip—time for round two. The driver put the pedal to the medal and was once again no match for the concrete and metal pillars surrounding the ATM.

No amount of horsepower and bad decisions could lighten the load of the ATM and fill the bed of the truck with financial happiness. The suspect is still at large.

CORRECTION: In the initial posting, we published that the suspect had been arrested. Upon further investigation and conversations with the Everett Police Department, the suspect is still at large.