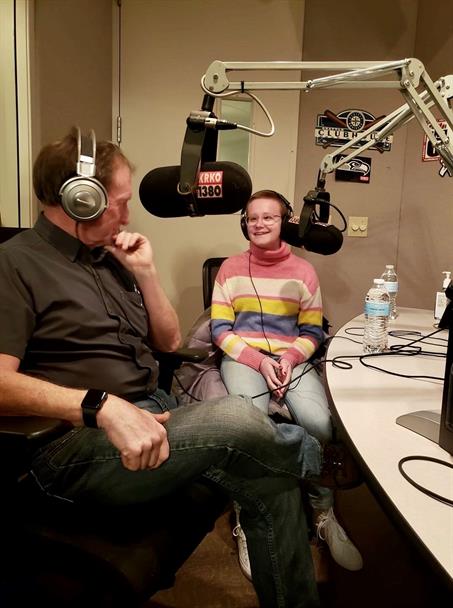 Our KRKO Radio Russell & Hill Female Student Athlete of the Month for December 2019 is Emily Hood. In February 2019, the once-promising wrestler for the Edmonds-Woodway Warriors was diagnosed, right in the middle of her junior wrestling season, with Diffuse Intrinsic Pontine Glioma (DIPG), which is an inoperable aggressive cancerous tumor on her brain stem. Emily receives regular treatment while still attending school for her senior year and is serving as a Manager/Coach on the Edmonds Woodway Girls Wrestling Team. She has even attended multi-day, out of area tournaments with the team, even though she is often fatigued or ill from the cancer and treatment. “Works hard, courageous to a fault and gives it her all every day,” is how Edmonds-Woodway Girls Wrestling Coach Terry Ray has described her. In September 2019, while attending and supporting the “Be Strong Be Gold 2019 Gala” she was awarded the #brAvery Award presented by the Avery Huffman Defeat DIPG Foundation. A statement on the foundation’s website noted that she was awarded “for continuing to bravely fight DIPG with the same strength, courage and zeal for life that Avery did.”