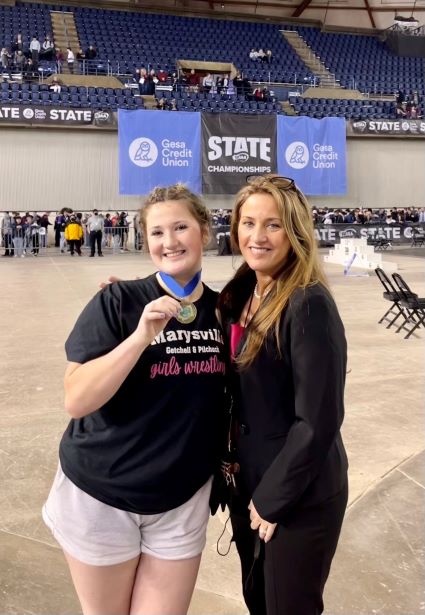 Our KRKO Russell & Hill Female Student Athlete of the Month for February 2022 is Alivia White, junior wrestler at Marysville Pilchuck High School. Alivia is a two-time state champion in girls wrestling; winning titles at 190 lbs in 2022 and previously at 190 lbs in 2020. (Due to the pandemic, there was no Mat Classic State Wrestling Tournament in 2021). White is only the third Snohomish County female to win two wrestling state championships; she is hoping to become the first ever three-time champion next year when she is a senior. Among her highlights: undefeated this season in both the regular season and postseason; pinned all four of her Tacoma Dome opponents in the state tournament; finished 4th last year at the Junior and Cadet National Championships in Fargo, North Dakota. White’s brother Cayden also won a state championship in 2020 and is now wrestling at Minot State University in North Dakota. Although she is still undecided about her collegiate wrestling future; Cayden and Minot coaches are all working to recruit her to the school. Head Girls Wrestling Coach at Marysville Pilchuck is her mom Andrea White.