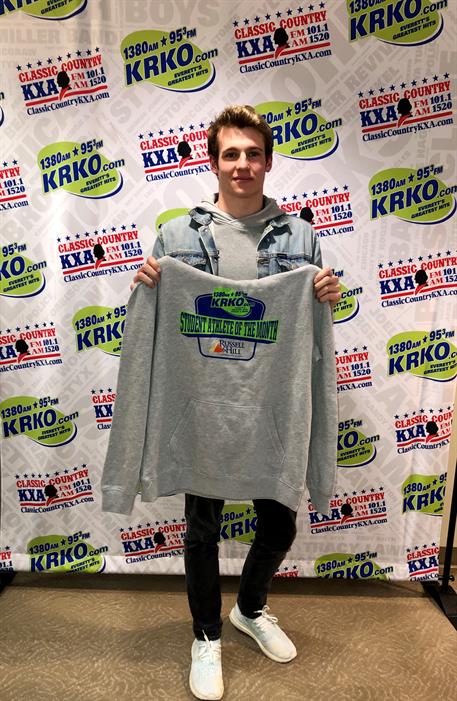 Matthew King of Glacier Peak Swimming is our KRKO Radio Russell & Hill Male Athlete of the Month for February 2020. King set two state meet recorders
(both held by Newport’s Ugur Taner from 1992) in the 50 yard and 100 yard freestyle races at the State Championships in Federal Way. His time of
43.24 in the 100 broke the previous state record by .49 seconds and was an astounding 2.72 seconds ahead of the 2nd place finisher. His time of
19.81 in the 50 freestyle broke the previous state record by .21. He was named the 4A Swimmer of the Meet after setting a state meet record with
a total of 330 points. Matthew also won state titles in both individual events in 2018. He elected not to swim for his school team in 2019 as he
was focused on competing nationally. Matthew’s times in both the 50 and 100 have qualified him for the United States Olympic Trials which will
be held in Omaha, Nebraska in June. Matthew is ranked by collegeswimming.com as the top overall recruit in Washington state and as the #43 senior
recruit in the nation. An outstanding student; Matthew carries a GPA of better than 3.9 and will be enrolling at the University of Alabama in the
Fall where he will continue to swim and hopes to either study Mechanical Engineering or Audio Engineering. Glacier Peak Swim Coach is Ron Belleza.