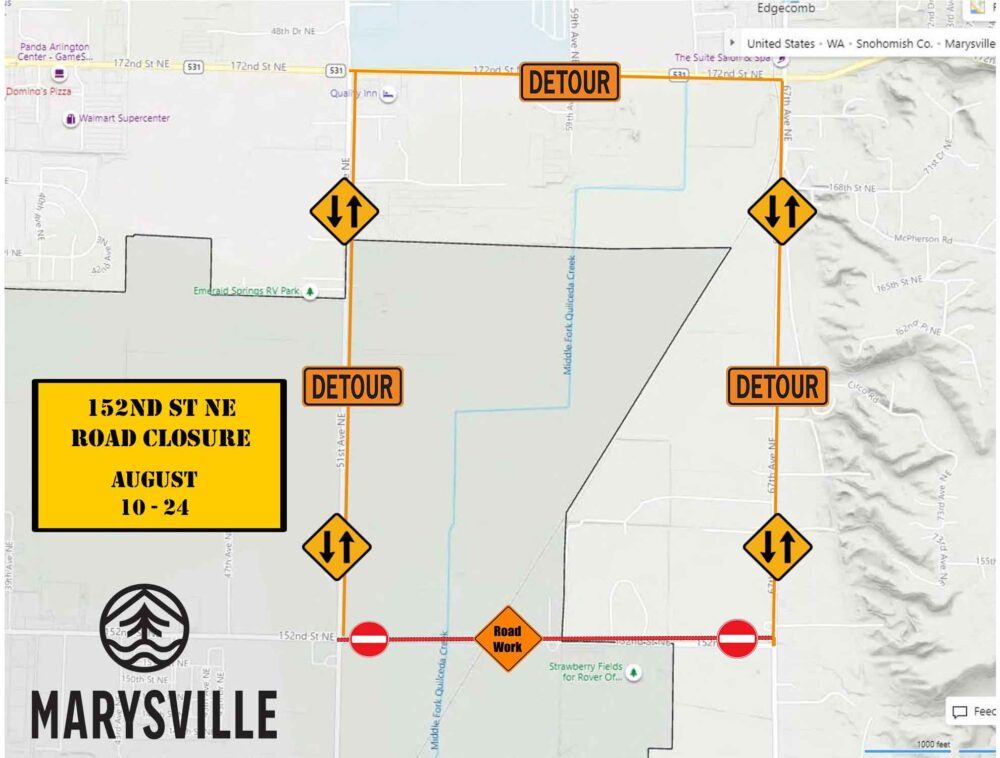 Mayor Jon Nehring of Marysville announced that beginning Tuesday, August 10, 152nd Street NE will be closed to through traffic between 51st Avenue NE and 67th Avenue NE through August 24th.

Enclosed in the media advisory was the reasoning for the closure. “The closure is required to build a fish-passable culvert beneath 152nd street NE, part of a project to realign and improve habitat conditions for Edgecomb Creek,” according to the release.

Traffic will be detoured north on 51st and 67th, then east and/or west on 172nd Street NE (SR 531)/ Detour signage is in place. Expect delays and plan for extra travel time.

Strawberry Fields will remain open and be accessible from 67th Avenue NE. Access to local properties will be maintained.

The construction work in the vicinity of the railroad tracks just west of Strawberry Filed includes:

Mayor Nehring also announced that Cedar Avenue construction will be getting underway next week for the Low Impact Development (LID) Improvements for the Cedar Avenue project.

The release stated, “The city will build new Bioretention facilities along Cedar Avenue between 1st Street and 4th Street to treat and filter stormwater runoff that flows into Ebey Slough.”

Apparently, the upgrades will be similar to the ones made on 3rd Street back in 2017 and 1st Street in 2017. The improvements include additional parking across Cedar from the Opera House, improved landscaping, pedestrian lighting, bike lanes, and Rectangular Rapid Flashing Beacon (RRFB) at 3rd and Cedar to improve pedestrian access and safety.

The City of Marysville wants drivers to be aware that they can expect intermittent single-lane closures with flaggers and potential delays at times.

The $1.59 million project is being handled by Contractor SRV Construction, Inc. Around 75% of the budget is funded by the Washington State Department of Ecology. The construction is expected to be completed by later 2021 or early 2022.

“The city is excited to continue its partnership with the Washington State Department of Ecology, improving the health of Ebey Slough and the Puget Sound, enhancing pedestrian access and safety, and beautifying our roadways,” Project Engineer Adam Benton said.

Winter Is Not Over Yet