Annual State of the Air Report Issued – Where Does The North Sound Stand?

Earth Day is tomorrow – April 22nd. Coincidentally, the American Lung Association recently released its 2021 annual State of the Air Report. The Lung Association’s annual air quality ‘report card’ monitors Americans’ exposure to unhealthful levels of fine particle pollution and ozone during the most recent three-year period of quality assured data. Unfortunately, the report found that nearly half of all Americans were exposed to unhealthy air in 2017-2019, placing more vulnerable to the impacts of poorer air quality such as older adults, children and those with respiratory complications.

The warmer climate has resulted in drier conditions during our warm season, and our warm season has broadened from the summer months to May through October. This past more than a week of warm dry April weather helped demonstrate how our seasonal warm season seems to be extending more into spring and fall.

These warmer dry conditions have led to a greater number of wildfires, particularly in Western North American including Washington State. Those wildfires have produced widespread smoke in three of the last four years in the North Sound – the first time that has ever happened. Those wildfire smoke episodes adversely impacted air quality with unhealthful amounts of fine particulate air pollution.

But the North Sound and Washington State were not the worst in the nation. California ranked number one for the worst wildfire smoke in this annual air quality report.

Another key air quality factor in the report was ozone. The warmer climate over the past decade has led to higher levels of ozone. Warmer temperatures make ozone more likely to form. Los Angeles, Ca, has the worst ozone levels in the nation, and sorry snowbirds, but Phoenix, Az, ranks in the top 10 worst. In contrast, Skagit County was ranked among the best counties in the nation for ozone levels.

This past winter’s well above normal mountain snowpack will help serve to delay the start of this year’s wildfire season, likely around the first of August as opposed to the middle of July. So the threat of wildfire smoke later this year will be reduced, but not eliminated. 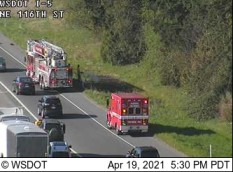 During the recent spell of warm dry spring weather in mid-April, it did not take long for fine fuels like grasses and tree litter to dry out and be ready to burn. There were a number of roadside and brush fires that erupted this past week, highlighting that we need to keep burning materials in our vehicles and closely manage any outdoor burning.

According to this report, the cleanest air in the nation belongs to Burlington, Vt, Honolulu, Hi, Elimira-Corning, NY, Charlottesville, VA, and Wilmington, NC. The worst air year round in the nation noted in this report belongs to Kern County, Ca, including Bakersfield.

For more information, you can read the American Lung Association’s 2021 ‘State of the Air’ Annual Report.