Centennial Celebrations at The Port

Everett, Wash. – On July 13, 2018, the Port of Everett officially turns 100 years old — celebrating a century of service to the
Port District and beyond. 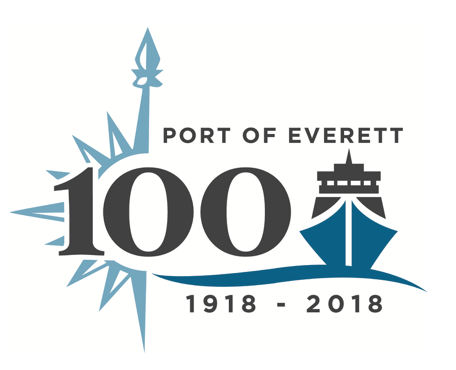 The Port of Everett was formed by a nearly unanimous vote of the citizens on July 13, 1918. Then, like now, the community desired an entity that could
reclaim the waterfront from private industry, protect the interests of the residents, create family-wage jobs and serve as a steward of our tremendous
natural resource — our waterfront. The Port, 100 years later, it is still focused on delivering on these core values.

“Today, as we celebrate our centennial year, we would like to thank the early residents of the Port District for believing in the value that the Port
of Everett would bring to the community so long ago,” Port of Everett Acting CEO Lisa Lefeber said. “Most importantly, we want to thank our current
Port District residents for their continued appreciation and support of our work today. We encourage you to come out to enjoy your Port and celebrate
with us. We have a lot of events planned around the waterfront for all to enjoy and have pulled together some great projects to commemorate our
Port history.” 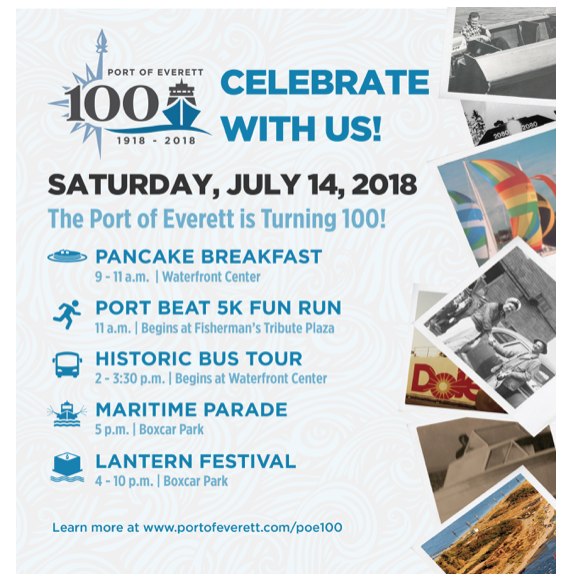 CLICK HERE TO VIEW THE FULL SCHEDULE OF EVENTS

The day will kick-off with a pancake breakfast at the Port of Everett’s Waterfront Center at 9 a.m., followed by the first-ever Port Beat 5K Fun Run
along the Port’s waterfront trail system at 11 a.m. The Fun Run will feature a sneak peek at Fisherman’s Harbor and the new Pacific Rim Plaza and
splash fountain that is otherwise closed to public access due to construction. Learn more and sign up for the Fun Run at www.portofeverett.com/portbeat5K.

Also, back by popular demand, the Port has opened up one more historic bus tour in partnership with Historic Everett at 2 p.m. Join local historians
and Port staff to hear about the evolution of our working waterfront “then and now.” Space is limited. RSVP and government-issued photo ID required.
Sign up at www.portofeverett.com/bustours. Throughout the day, the Port will also be soliciting
feedback from the community on what it would like to see the Port look like in the next 100 years.

Later in the day, come down to view a Maritime Parade from Boxcar Park at 5 p.m. Port partners will parade through Port Gardner Bay on vessels and
boats, honking horns, waving flags, shooting water cannons and more! Swing by the Port of Everett’s booth to have some photo booth fun and place
mementoes into our centennial time capsule that will be opened fifty years from now in the year 2068.

Stick around Boxcar Park after the parade to enjoy festivities hosted by One World Lantern Festival. It’s the first-time they have hosted their festival
in Everett, and it includes music, food trucks, face painting, yard games, vendor booths and more. At sunset, registered participants can take
part in decorating and launching an LED floating lantern into the water around the Park. Space is limited. Learn more and sign up at www.waterlanternfestival.com/everett.php.

*This event is hosted by a third party, not affiliated with the Port of Everett.

Music at the Marina Returns to Port of Everett