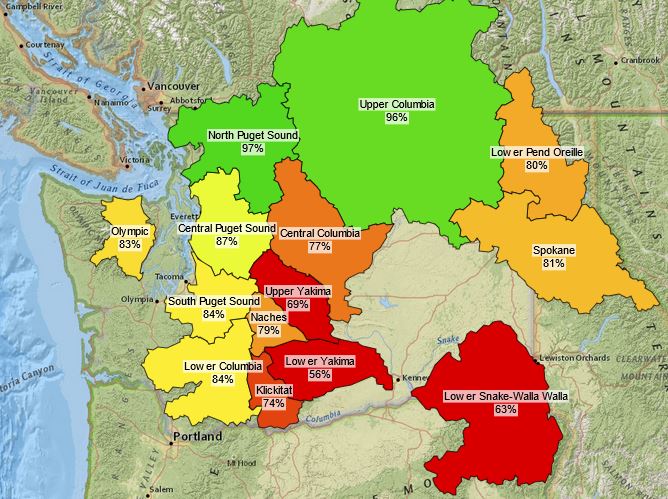 There may be some water supply and wildfire issues that unfold in summer and fall. This was a second La Nina winter season in a row. La Nina winters usually result in a healthy mountain snowpack and the winter of 2020-21 did just that, ranging from about 110 to 135 percent of average.

This winter season, the wet period from late November into mid-January resulted in a mountain snowpack that ranged from 100 to 130 percent of normal. Recall that the Cascade pass highways closed several times due to heavy snow and high avalanche danger.

Then in mid-January, a relatively drier weather pattern became established and continued into mid-February. The month long mid-winter drier period resulted in putting a dent in the snowpack, falling behind average and dipping to 65 to 95 percent of average by mid-February.

The latest statistics from the Northwest Avalanche Center show that the mid-winter dry period suppressed the snowpack. As of April 1st, the snowpack in the Olympics and Cascades ranged from 60 to 85 percent of normal. Early this week’s healthy storm will add a foot or so of new snow to the mountain snowpack, but still not enough to reach at least average in most locations.

The more limited mountain snowpack may offer some challenges this summer and fall. One concern is an earlier start to the wildfire season, likely in July. The North Sound has suffered periods of wildfire smoke and poor air quality four out of the last five years after decades of no wildfire smoke issues. Nearly all that smoke was blown into the region from wildfires in British Columbia, Eastern Washington, or from the south in Oregon and California.

The latest seasonal weather outlook from the National Weather Service’s Climate Prediction Center (CPC) again shows what has been the trend thus far this century, a warmer than average July through September. The odds on another ‘heat dome’ similar to one experienced in late June last year are remote, but cannot be ruled out.

The outlook also shows near average precipitation this summer. Summertime is the driest time of the year.

Looking toward this fall, the current La Nina evolves to Neutral conditions, meaning the sea surface temperatures in the Eastern Pacific Ocean have good odds on being close to average. Neutral conditions lie in between La Nina (cooler than average equatorial Eastern Pacific sea surface temperatures) and El Nino (warmer than average).

In the meantime, prepare for what may be another warm summer with a greater chance of wildfires and wildfire smoke later this summer, along with more limited water supplies.