It isn’t every day that a national championship sporting event lands on our doorstep here in Everett but we’ve got one going on this week. Last month,
when the call went out for volunteer help at the USA National Curling Championship (at Xfinity Arena and happening now through Saturday, February 18th)
I answered the bell.

Although my first volunteer shift isn’t until later this week, I headed to the arena on Sunday night to see what championship curling is all about. I tried
curling once, several years ago, at the Granite Curling Club in North Seattle, with mixed results. Okay, that was just a highly exaggerated statement.
I was a train wreck on ice.Curling requires balance and hand-eye coordination, neither of which I possess in great quantities.

Without going into all of the rules, the basic object of the game is to slide a 44 pound granite “stone” down a sheet of ice (which is 146 feet long) into
a 12-foot target area called the “house”. Each team of 4 persons throws a total of 8 stones with points awarded for being closest to the center of
the bull’s-eye target area. This takes place 10 times in a complete game with each round known as an “end.” Think “inning” in baseball and you’ve got
the idea of an end.

And what about the guys with the brooms sweeping in front of the stones? That’s to heat the ice, reduce friction and cause the stone to travel faster and
straighter (less “curl”). This is critical when placing the stone exactly where you want it or are trying to knock your opponent’s stone out of the
house.

This week at Xfinity Arena you can watch 5 matches going on simultaneously during the round robin pool play through Thursday. Things get a bit more serious
on Friday and Saturday with the playoffs and finals taking place.

There are 10 men’s teams and 8 women’s teams participating this week. Scanning through the team bios, it seems that most of the participants are from either
Wisconsin or Minnesota. I did notice that one of the women is from Burbank, California. All this time I thought that the only use for ice in Southern
California was for making margaritas!

For those wondering if there is a local rooting interest in the championships, the answer is yes. Brady Clark from Lynnwood is the skip (synonymous with
captain) of the appropriately named Team Clark. Not only that, his wife Cristin leads the women’s version of Team Clark.

Schedules, ticket information and everything else you’d want to know about the National Curling Championship can be found at: www.usacurlingnationals2017.com. 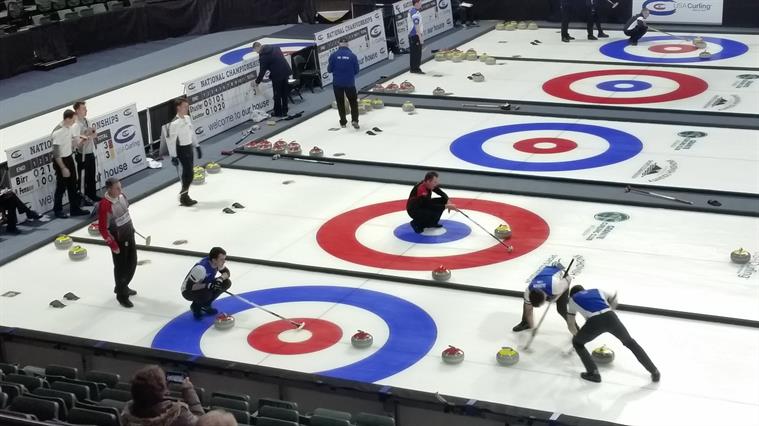