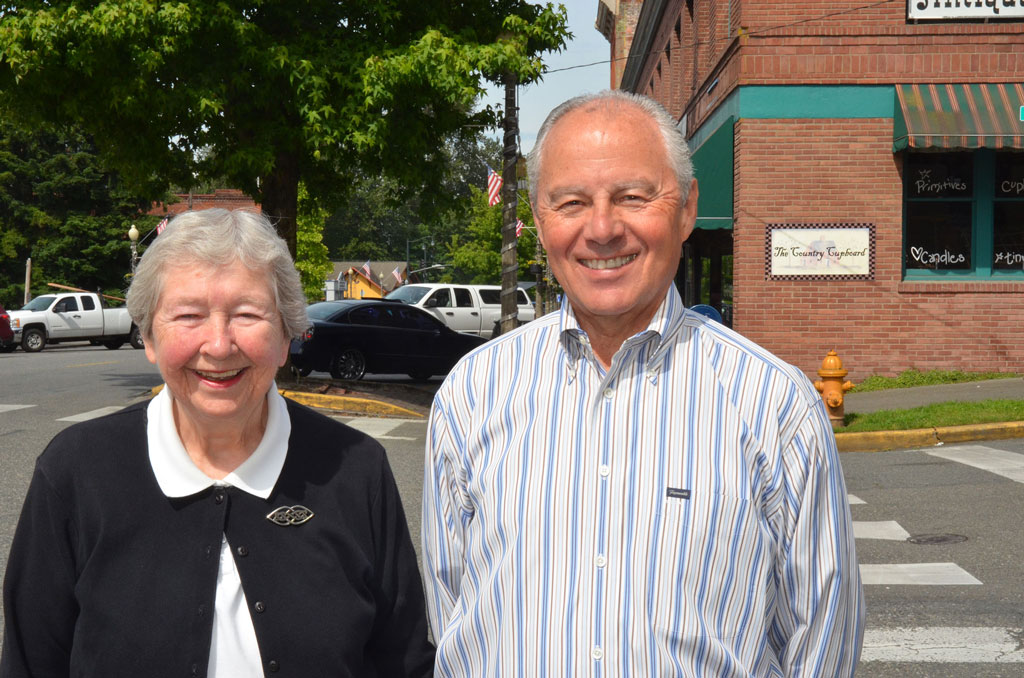 In celebration of the Foundation’s 30th Anniversary, co-founders, Marian Berge and Mal Harding, are the parade grand marshals July 16th at 10:30 a.m.

Snohomish, WA June 15, 2016 – In 1986 The Snohomish Education Foundation (SEF) was co-founded by Marian Berge and
Mal Harding. Kla Ha Ya Days celebrates the Foundation’s 30th Anniversary with Berge and Harding leading the annual parade as co-grand marshals
on Saturday July 16th starting at 10:30 a.m. in Snohomish, 30 miles northeast of Seattle.

Marian was well-known for handling projects that no one knew what or how to do and making it happen. Even though Mal jokes that Marian did all the work,
together they gathered a few like souls, had legal papers drawn up and proceeded with the first fund raiser for SEF.

“It was held in the Armory with hay bales,” Marian reminisces. Box lunches were auctioned and a couple of hundred dollars were raised. “We were so excited,”
Mal beams.

That was 1986. Since then the SEF has raised $600,000 in classroom grants to 1,051 classes and $1.5 million in scholarships to 1,921 students. The foundation
holds two fund raisers each year: a breakfast in the spring and an auction in the fall.

Adding to the fund raising efforts this year is the Kla Ha Ya Beats 5K & 10K Run and Kids 1 Mile Run in which a portion
of the proceeds will go to SEF. The Kids 1 Mile begins at 6pm at 1st Street and Avenue A on Saturday July 16th followed at 6:30pm for the K5 & K10. The Run will be serenaded with live music. DJs every mile along the Snohomish River will keep the beats going.
To register and for more information, go to https://www.raceit.com/Register/?event=36977.
Most importantly, use discount code SEFKHY16 for SEF to receive credit.

An estimated total of $191,000 in scholarships was awarded to 136 students at the end of the 2016 school year. “We are so pleased that the Snohomish Community
continuously comes together in supporting student success,” says Sherri Williams, executive direct of SEF. “We thank Marian and Mal for realizing and
creating the Foundation that has helped so many children throughout the past 30 years.”

The secret to SEF’s success has been getting the word out, Mal continues. “Once people hear about SEF, they think it’s great and are willing to give.”

Berge and Harding are both retired now, traveling and visiting with grandchildren and still involved with SEF. Their parting words, “Send money. We’ll
put it to good use.”

The Kla Ha Ya Days Festival (KHYDF) is a nonprofit organization that produces
an annual local festival to welcome people throughout the Pacific Northwest to celebrate the community’s beauty and goodwill of Snohomish. Proceeds
from the KHYDF’s activities support Snohomish-based community organizations with programs and services for youth and families. For more information
contact Linda Davis at 425-493-7824 or visit the website http://www.klahayadays.com/.

Everett Rotary Honors Three as Students of the Month for April

Snohomish Teen In Critical Condition After Brawl Near Alderwood Mall