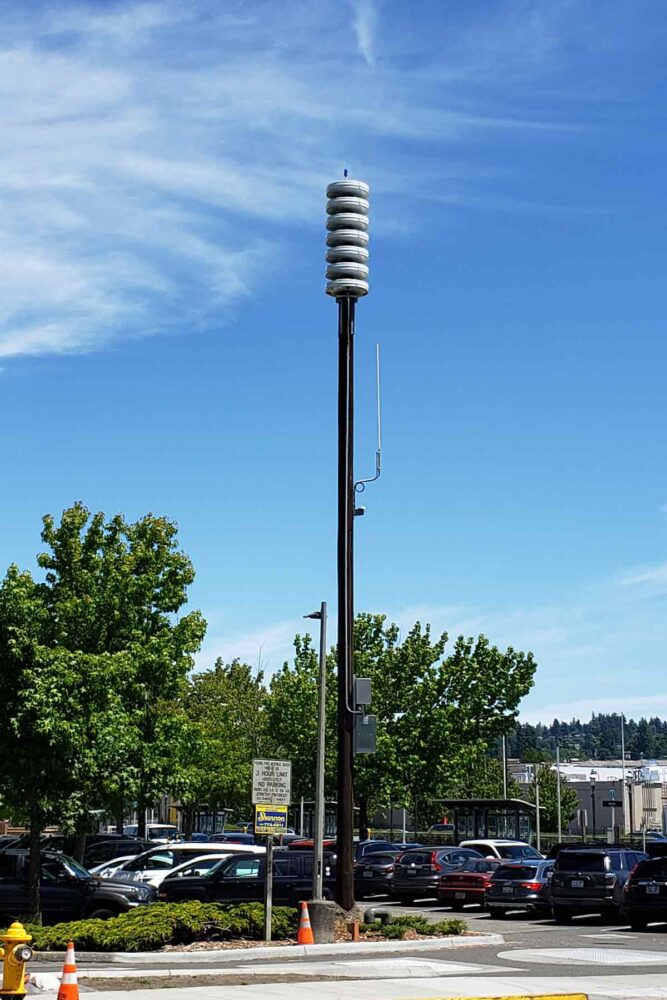 A new outdoor tsunami warning siren system was recently installed on the Edmonds waterfront just off Dayton Avenue. The siren system is properly known as an All-Hazards Alert Broadcast or AHAB, and joins the more than 70 that are along the Washington coast, in the Strait of Juan de Fuca, and in Whatcom County.

The Washington legislature recently approved $2.7 million to couple with $150,000 of federal money from NOAA to add more AHABs that when complete, will involve 122 outdoor siren systems.

The new Edmonds system is on the front end of the new set of AHABs being installed. In the North Sound, two more will be installed along the Everett waterfront, eleven in Skagit County and six in Island County. Others include five more in Whatcom County along with additional AHABs along the coast and Strait to help fill in gaps. The new Everett systems will be installed soon at the Port of Everett at 2900 Terminal Avenue and near the 10 Street Boat Launch.

The biggest threat of tsunami in the North Sound is from the Cascadia Subduction Zone about 100 nautical miles off the Pacific Northwest coast and Vancouver Island. The last Cascadia earthquake occurred in January 1700 and scientists have found it occurs about every 300 to 500 years, meaning we are within the time line window.

The North Sound AHABs would provide about an hour’s lead time before the first Cascadia-borne tsunami wave arrival. These tsunami waves are not expected to be large angry Hollywood waves in the North Sound, but rather inundation of low lying areas. The Cascadia earthquake and tsunami would likely be similar to the March 2011 Japan event – the two to five minutes of shaking will be easily felt and by far, the greatest tsunami damage would be along the outer coast.

Yet, there are significant earthquake faults that cross Puget Sound. They include the Tacoma Fault, the Seattle Fault, and most significantly for the North Sound – the South Whidbey Island Fault. Geological evidence shows these earthquake faults have produced local tsunami.

In the case of these local earthquake faults, the shaking itself serves as the warning. Once the shaking stops, move to higher ground away from Puget Sound shorelines. Snohomish County emergency authorities conducted an exercise in the fall of 2019 to better prepare for a South Whidbey Island Fault event that involved an anticipated magnitude 7 quake.

These AHAB outdoor siren systems will air both a loud siren as well as a verbal message indicating what the warning is and what to do. They also have a US Coast Guard light atop each AHAB to help those with hearing disabilities. The AHAB system is also routinely tested to ensure they remain fully operational. On the first Monday of each month at noon, the AHABs air Westminster chimes.