Public Input Wanted Regarding The Future Of Paine Field Airport

Snohomish County’s Paine Field Airport is developing a Master Plan that will address airport needs thru 2040. The airport master plan consultant, Landrum & Brown, recently released an airport forecast, a chapter of the developing Master Plan and you can comment on the chapter through November 24th at https://www.painefieldmasterplan.com/ 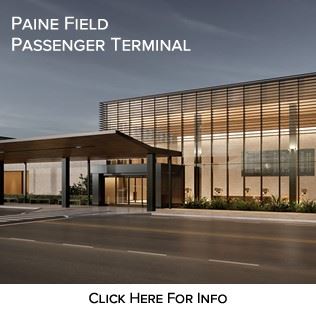 Paine Field is currently limited to 24 daily arrivals and 24 departures. Currently as the region emerges from the pandemic that dampened air travel, Alaska Airlines will operate up to 12 departures a day starting on January 4th of next year. United Airlines ended Paine Field operations earlier this year.

Total passenger traffic is forecast to grow to near 4.3 million by 2040. As a result, the Master Plan will lay out how the airport can accommodate this additional passenger traffic as well as other aviation needs. One option has already been ruled out – the need for another runway.

Those other aviation needs include more facilities for general aviation and air cargo operations. Fed Ex recently moved into the former Boeing Dreamlifter Operations Center at the airport and started cargo operations. With additional general aviation needs, the requirement for more hanger space and locations for aircraft lease positions exists. The airport property sits on about 1300 acres and nearly 120 acres on the west side are undeveloped.

Other airport improvements being considered include upgrades to access roads, tarmacs, taxiways, and other pavements. The recent Congressionally passed Infrastructure Bill will help pay for these improvements.

The Airport Master Plan will address the long-term strategy for growth in air passenger traffic and the need for more airport support facilities. In the larger picture involving future aviation needs in the whole Puget Sound region, particularly as SeaTac reaches its full capacity within the next 20 years, Paine Field is but one existing airport being reviewed for expansion. Another in Snohomish County is Arlington Airport.

The Paine Field Master Plan is expected to be completed in the spring of 2023. The plan will need approval from the Federal Aviation Administration and the Snohomish County Council. Other than the airport forecast chapter public comment period through November 24th, there will be other opportunities for public feedback as the Master Plan continues its development.

Snohomish County Emergency Management has been nationally recognized as... Read More.
Previous Next