In a recorded video conference published on the Snohomish Health District’s YouTube page, Exec. Somers announced the purchase of 150,000 home COVID-19 test kits. He explained that although this purchase won’t solve the high demand issue for testing, it should ease the burden and relieve some of the pressure on in-person testing sites. Somers continued by stating that the kits will take a few weeks to arrive, but while they wait for the shipment, they are working on a distribution plan for how the kits will be allocated throughout the community in the coming days and weeks.

“In addition to the efforts by the county to purchase test kits, the health district has also placed a purchase order for an additional 100,000 kits for distribution through similar channels,” said Dr. Spitters of the Snohomish Health District. His hope is that those kits will increase the testing capacity of the county during this COVID surge. Dr. Spitters announced that the health district has been working with the State Department of Health and the Federal Government to try and expand vaccine and testing availability. “I’m happy to tell you that Snohomish County has been selected as a location for an indoor mass vaccination site that should begin operating roughly toward the end of the month,” said Dr. Spitters. More details will be announced in the coming days. 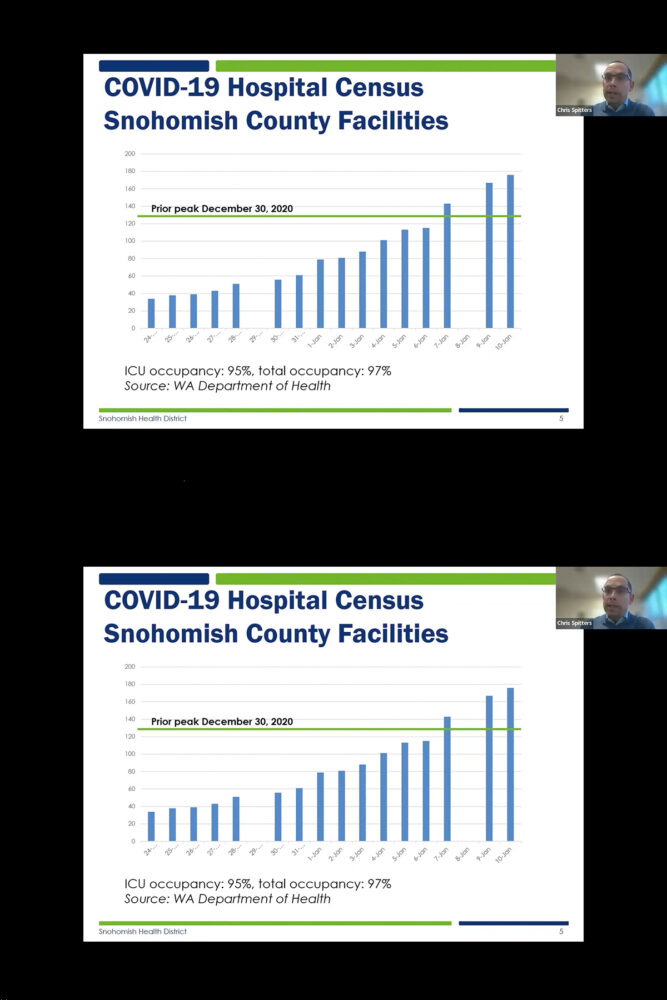 The conversation continued into COVID data, showing that in the past 52 weeks, Snohomish County has had successive doublings in the past four weeks up to nearly 11,000 cases reported in county residents last week, up from roughly 5,000 the week before. “When we translate that into the two-week case rate, it looks like 2,000 Snohomish County residents for every 100,000 got infected in the past two weeks,” said Dr. Spitters. “So that’s 2% of the population became a reported case… and when you factor in people who were asymptomatic who didn’t feel sick enough to pursue testing, or who pursued testing but were unable to get it, that’s probably more like 8,000-10,000 people or 8-10% of the population probably got infected in Snohomish County with Omicron in the past two weeks.”

The next graph shown was a look at the hospital numbers county-wide at all four hospitals. The data showed that the number of beds filled by COVID patients from December 24th through Jan. 10th is up to 176 patients. Of that number, 15% of them are in respiratory failure and on mechanical ventilators. Dr. Spitters explained that with that data, roughly 0-2 patients are dying per day in Snohomish County from COVID. According to the Washington State Department of Health, the County’s ICU occupancy is at 95% and total occupancy is at 97%.

Additionally, the Institute for Health Metrics and Evaluation at the University of Washington has predicted that the county should anticipate another week or so of increasing case rates before slowly decreasing over the course of the next few months. “So that predicts a peak in mid to late January with infections, and late January to early February with hospitalizations,” said Dr. Spitters.

Long-term care facilities are also seeing an uptick in cases both in residents and staff. “As of yesterday we had 63 facilities with one or more cases and the total number of cases among staff and residents in those 70 facilities is about 250-300 so that’s also going on,” said Dr. Spitters. He also stressed the importance of following all the prevention measures the health district has been mentioning. Particularly getting the booster shot, wearing a mask at all times, and using a higher quality mask whenever possible.

After Dr. Spitters finished his remarks, Dr. Jay Cook, Chief Medical Officer for Providence Regional Medical Center Everett took his turn on the mic. “Since Christmas Eve, the number of COVID cases at providence Everett has increased five times… and the number of COVID cases that are sick enough to be in our intensive care unit in that same period has increased three times,” said Dr. Cook.

The Chief Medical Officer continued by stating that about 90% of patients who are sick enough to be in Providence’s intensive care unit are not vaccinated. “This has been consistent throughout the pandemic,” said Dr. Cook. Moreover, one of the effects that the Omicron variant has had on our healthcare system is the number of caregivers and healthcare workers who have either been exposed or infected with COVID due to this strain’s transmissible nature. This has resulted in issues with hospital staffing.

In order to manage the challenges that the hospital is facing, Providence Everett has postponed all non-emergency surgeries and procedures. “These are not trivial procedures, these are essential and they need to be done,” said Dr. Cook. The team at Providence Everett has determined that it’s not likely to cause harm if these surgeries are postponed for two to three weeks. “By that time, we anticipate and hope we can resume these, but we are evaluating our capacity to do this on a week to week basis,” said Dr. Cook.

Additionally, Providence Everett has set up an on-site Emergency Command Center to coordinate the staffing supplies and resources needed to make sure that patients can receive the safe care that they need.